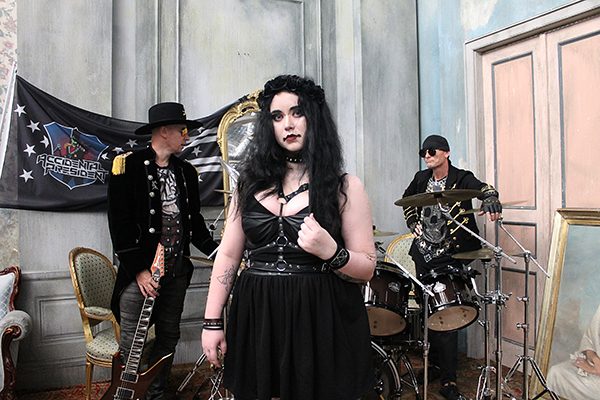 Accidental President are a female fronted Alt-Rock 3 piece playing their own brand of hard rock mixed heavily with goth and metal influences – with a theatrical flair. The band released their self titled debut album on Wednesday, 1 July 2020. Now, the band is thrilled to reveal a brand new lyric video Last Breath.

Accidental President says about the video: “Vilified? Misrepresented? Wrongly accused? Falsely judged? Resented for making a stand? Attacked for challenging injustice? Ignored for challenging the status quo? Mocked for being different? Betrayed by your family? Rejected by your friends? Blocked by tradition & vested interests?…..Fight till the last breath. The song is inspired by The Hunt (2012) Starring Mads Mikkelsen.”

If Accidental President musical talents don’t immediately captivate you, their live performance will. Each live show is packed full of visual stimulation. A rapidly growing fan base locks in to see the spectacle. From creative costumes to an in your face stage show, Accidental President is not a band you want to miss live.