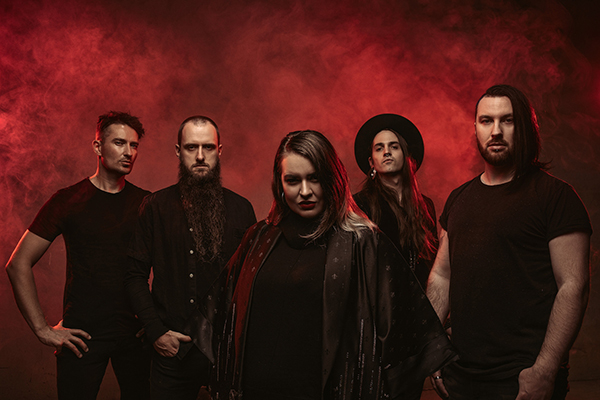 “We left no stone unturned when crafting this record which was 3.5 years in the making. Featuring authentic choir arrangements, extensive analogue synth labs, percussion labs, and a full hoard of Melbourne’s very best classical performers whose guest appearances all breathed life into a full body of work that we are all intensely passionate about and proud of.” – Acolyte

‘Entropy’ is a confrontationally dark, raw, emotional, conceptual body of work, containing career defining performances from all members and is both crushingly cinematic and timeless in character.

This week, Morgan-Leigh spoke with Prog Magazine and gave them an exclusive Track by Track rundown of the album and its concept.

Morgan-Leigh speaks about the concept behind ‘Entropy’ –

“Entropy is a fully realised conceptual record exploring the early stages of ‘loss’. Presented like diary entries, the record ebbs and flows through an array of actions, feelings & emotions that are commonly experienced when trying to ground ones self all while carrying the early weight of trauma.

Though lyrically the songs relate to me personally, I have tried to expand on those ideas & simplify my thoughts in order to make the songs & topics feel more broadly familiar to the listener. Hopefully anyone who has experienced the loss of something/someone they love, or even a part of themselves will find refuge & a sense of release from this musical adventure. This record is very dark, lonely & cold in its tone & attitude.

A lot of this record is written from an internal point of view threading title tracks together with whispers (mimicking a loud, manic mind) & winds of change taking the listener from one musical instalment to the next. I have erred on the side of giving a very raw, primal, & at times theatrical vocal performance to best portray how raw & real these topics are.

The producer and I spoke early on about not overly editing my vocal takes so that the emotion behind the performances became the focus.

ACOLYTE’s latest video single ‘RESENTMENT’ channels the psychedelic soul and power of 70’s rock icons Janis Joplin and Blondie, merged with the musical spirit of Deep Purple and RUSH with a modern prog metal twist  – Acolyte are successfully colliding the past and the future to create a sound both fresh and nostalgic in nature. Keyboardist David Van Pelt spoke to Prog about his impressive synth collection and his favourite synth solos in Prog. You can read the feature HERE.

Morgan-Leigh has expressed the importance of this song within the album concept, and opens up to speak more about the underlying connotations of the track.

“As we recorded the ENTROPY record, I was right in the midst of battling a nasty case of Chronic Fatigue (CFS). I would attend the studio for a full day to lay down vocals and then come home and pass out for often days at a time. The pattern can be quite isolating and lonely. When you are that alone for such an extended period of time, the mind can work in incredible ways, both positively and negatively.”

Morgan-Leigh has also spoken in detail with Maniacs about her experiences with CFS. Watch the interview HERE

Acolyte will soon announce details of a online streaming event in celebration of their new opus, and have also announced they are now represented by Destroy All Lines in Australia for live bookings.