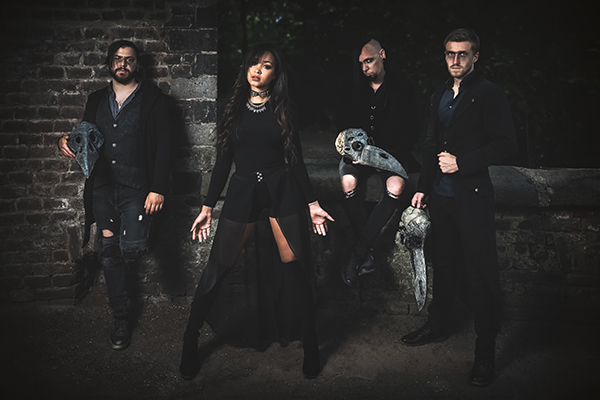 As the penultimate song on Chapter I Revisited, “Demons” arises as another emotional and intense performance by AD INFINITUM‘s multifaceted vocalist Melissa Bonny, accompanied by harmonic instrumentals while presenting the anthemic character in the chorus. Light as a feather, Melissa gently whispers moments of the lyrics before setting the stage for the second single’s grand finale, taken from the new acoustic album, Chapter I Revisited, to be released digitally this Friday, December 4 via Napalm Records!

AD INFINITUM on “Demons”:
“Look what the advent calendar offers you today! We are happy and proud to share the music video and single “Demons” before we can finally introduce you to Chapter I Revisited out on Friday!”

Enjoy the Video for the Acoustic Version of “Demons” HERE!

Taking off the masks!

Symphonic metal alliance AD INFINITUM have reimagined their spellbinding debut album, Chapter I: Monarchy, with Chapter I Revisited – a very special acoustic version of their first full-length! The quartet, fronted by inimitable vocalist Melissa Bonny, has impressively attired the ten songs on Chapter I Revisited as an acoustic arrangement, showcasing how beautifully hits like “Marching On Versailles” (with more than 1.2 million views on YouTube) or “See You In Hell”, amongst others, magically unfold in a more instrumentally-organic environment.

Surrounded by gentle guitar playing, the originally dark symphonic metal album transforms to lightness throughout the harmonic approach of instruments. Melissa Bonny’s impressive vocal power shines like a bright star in the dark sky and manages to shake the firmament despite the acoustic background, notedly expressed as the powerful growls in “Maleficent” break through the silent surrounding.

Pre-Order your Digital Version of Chapter I Revisited HERE:

Melissa Bonny on Chapter I Revisited:“After the release of Chapter I: Monarchy, we received very positive feedback concerning the acoustic bonus tracks. This summer, when we realized that we would probably not tour at all this year, we decided to create something special for the people who support us. We revisited and re-recorded our Chapter I entirely, and gave it a brand new atmosphere. Please welcome Chapter I Revisited!”

Chapter I Revisited Tracklist:
1. Infected Monarchy
2. Marching On Versailles
3. Maleficent
4. See You In Hell
5. I Am The Storm
6. Fire and Ice
7. Live Before You Die
8. Revenge
9. Demons
10. Tell Me Why