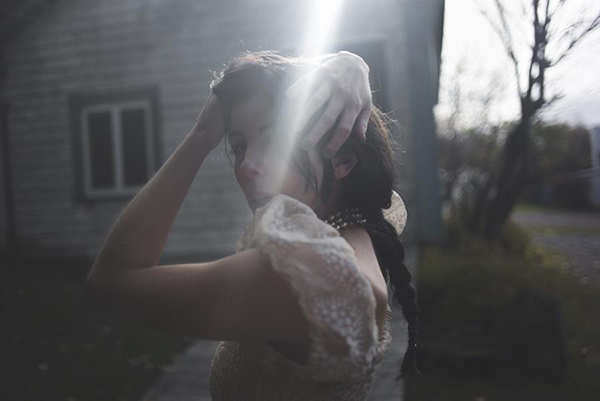 one hand on the steering wheel the other sewing a garden

OUT SEPTEMBER 24TH ON SADDLE CREEK

Montreal’s Ada Lea (the moniker of Alexandra Levy) announces her new album, one hand on the steering wheel the other sewing a garden, out September 24th on Saddle Creek. In conjunction, she presents an evocative and beguiling new single/video, “damn,” which follows the “gorgeous, melancholy” (Brooklyn Vegan) “hurt.” The follow-up to her debut, what we say in private, is on one hand a collection of walking-paced, cathartic pop/folk songs, and on the other a book of heart-twisting, rear-view stories of city life. The album is set in Montreal and each song exists as a dot on a personal history map of the city where Levy grew up. The city exists as both the location of and a character in many of these songs.

Levy penned and demoed this batch of songs in an artist residency in Banff, Alberta. After sorting and editing she made her way to Los Angeles to record with producer/engineer Marshall Vore (Phoebe Bridgers) who had previously worked on 2020’s woman, here EP. After a long walk to the studio each morning, Levy spent her session days diving into the arrangements, playfully letting everything fall in place with complete trust for her collaborators. She notes “Marshall’s expertise and experience with drumming and songwriting was the perfect blend for what the songs needed. He was able to support me in a harmonic, lyrical, and rhythmic sense.” Other contributors that left a notable fingerprint on the soundscape include drummer Tasy Hudson, guitarist Harrison Whitford (of Phoebe Bridgers’ band), and mixing engineer Burke Reid (Courtney Barnett). Many songs came together with a blend of studio tracks and elements from the pre-recorded demos.

The resulting sounds range from classic, soft-rock beauty to intimate finger-picked folk passages and night-drive art-pop. And the textures are frequently surprising due to the collage of lo-fi and hi-fi sounds that tastefully decorate the album without ever clouding the heart-center of the song. Inspired by personal experience, daydreams, and Elena Ferrante’s Neapolitan novels, the lyrics center storytelling on a bigger scale. The experience and emotions of a year are communicated through Levy’s vignettes of city life. Her prose is centered in its setting of the St Denis area of Montreal as it draws up memories from local haunts like Fameux, La Rockette, and Quai des Brumes in rearview reverie. Levy creates a balance through the album’s year by splitting her songs evenly into four seasons.

As a song of winter, opening track “damn,” kicks off the narrative with the events of a cursed New Year’s Eve party. The song feels timeless with an AM Gold groove and 70s studio sheen. The accompanying video, directed by Monse Muro, is evocative and beautiful. It features stunning and intimate choreography by Axelle “Ebony” Munezero and Brittney Canda. Some of the movements are elongated and smooth, while others are erratic and abrupt.

Whether to consider these songs fiction or memoir remains unknown. Levy says “Why would I try to write a story that’s not my own? What good would that do?” but on the other hand, she is quick to note the ways that language fails to describe reality, and how difficult this makes it to tell an actually true story. The poetic misuse of the word “sewing” in the album’s title serves as a nod to the limitations words provide. What does it mean to sew the garden? And how can we appreciate its carefully knit blooms when the rearview mirror is so full of car exhaust?