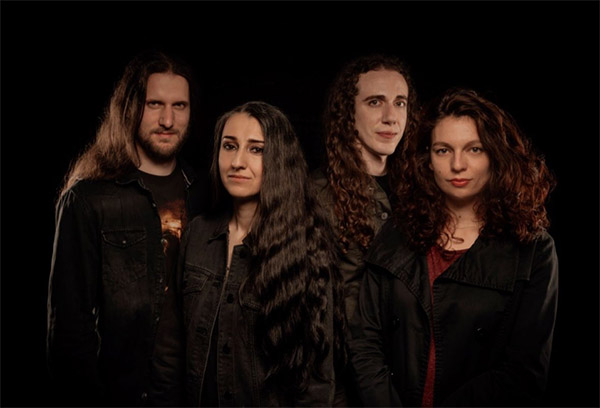 A Dream Of Wilderness out November 19, 2021 via Napalm Records
Pre-Order HERE!

Toulouse-based symphonic melodic death metal powerhouse AEPHANEMER is currently gearing up for the release of their third and thunderous full-length studio album, entitled A Dream Of Wilderness.

The record will be out November 19, 2021 via Napalm Records.

Starting out as an unbelievably successful DIY ride that suddenly turned towards international acclaim, the indisputable AEPHANEMER is one of the most exciting melodic death metal sensations of the modern age.

If their latest, much-acclaimed Prokopton was a noteworthy, impressive sophomore album from one of Europe’s best up and coming melodic death metal bands yet, A Dream Of Wilderness sees the French four-piece doubling down on its songwriting skills: Faster, tighter and heavier, AEPHANEMER’s upcoming album unleashes an anthemic adventure of brutally fast riffage and epic melodies!

After the French four-piece just recently shared a first appetizer and single, the rousing track “Panta Rhei”, today they’ve unleashed another killer song alongside a video clip! “Antigone” represents a dark and gloomier yet no less powerful side of the band – adding to the diverse blend that is A Dream Of Wilderness.

Watch AEPHANEMER perform in the breathtaking setting of “Les Lapidiales”, an abandoned quarry in France transformed into a magical place by talented sculptors.

Check out the breathtaking music video for “Antigone” HERE:

“We’re happy to share with you our new song and video: Antigone! It is extracted from our new album, A Dream of Wilderness, to be released on November 19, 2021 through Napalm Records. With this album, we reinforced the classical influence and symphonic component of our sound and we feel this song embodies that very well. We hope you will enjoy it!”

AEPHANEMER doesn’t seem to fear boundaries. Their new album delivers a wide metal range that represents a dark and gloomier yet no less powerful side of the band, while otherworldly dimensions of blast beats, furious riffage and heavy, razor-sharp death metal anthems will have you headbanging as fast as you can.

Especially in this day and age of staying “true” and limited within a sound and scene, A Dream Of Wilderness is a welcome diversion and a brave record artfully blending brutally fast symphonic death and raw melodic metal into a multi-faceted epic!

Pre-order your copy of A Dream Of Wilderness HERE

The record was mixed by Dan Swanö at Unisound AB, and mastered by Mika Jussila at the Finnvox Studios.

A Dream Of Wilderness track listing:

The album will be available in North America in the following formats: