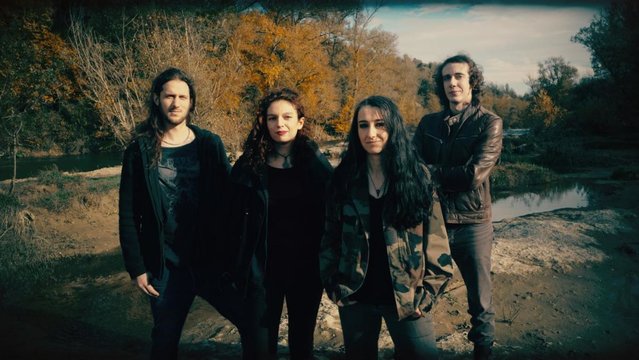 Integrating the elements of Scandinavian melodic death metal, Slavic traditional music and classical symphonics, the French four-piece band has developed a sound that could likely influence a whole new generation of metal. With their 2014 debut EP, Know Thyself, followed by the critically acclaimed full-length, Memento Mori, in 2016, Aephanemer quickly assembled an impressive, loyal fanbase from all over the world – stepping out of one of Europe’s best metal secrets to the biggest hopes in the new wave of melodic death metal! Due in part to their deft musicality, high-octane live performances at prestigious festivals alike Wacken Open Air and a fresh, modern sound, the band quickly gained high praise from both fans and critics alike, but also the well-deserved attention of Napalm Records. Aephanemer could not be more proud to have their latest, sophomore album, titled Prokopton and originally self-released in March 2019, reissued by the label, and for the first time on vinyl, too! To celebrate in perfect style, the band has just premiered a brand new music video to the blistering track “The Sovereign”!

“We are very happy to present this new video about a song we particularly appreciate: The Sovereign!” The band states: “We are grateful to the director and team which put all this together, it was a huge pleasure to shoot it and we hope you’ll like it as much as we do!“.

Get your dose of the purest melodic death metal by Europe’s up and coming Aephanemer HERE:

Furthermore, Aephanemer have teamed up with labelmates and metal pirates ALESTORM for an extensive Canadian tour this fall. Make sure to catch this diverse and exciting live package at the following dates: