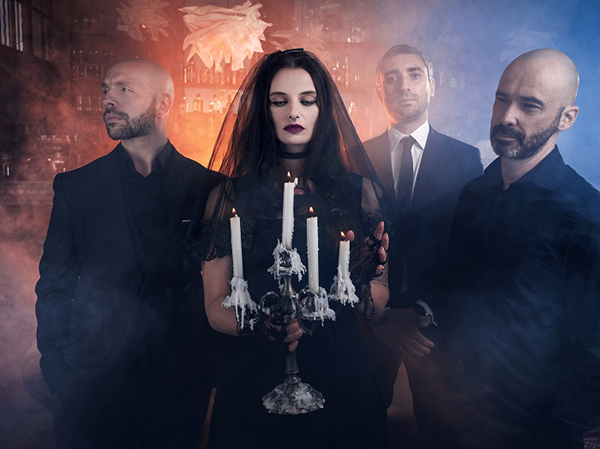 French death metal band AKIAVEL is pleased to announce that it will release the vinyl edition of its critically acclaimed new album “Væ Victis” on August 6th 2021. The album will be available as a limited edition green “envy” splatter vinyl.

The album is getting some incredible reactions, see below quotes from some of your peers.

“The French quartet’s sound most readily bring forth comparisons to Carcass, At The Gates, and Gossow-era Arch Enemy. Sure, there are well-established bands still keeping the melo-death sound alive, but it’s refreshing to see a new band come on to the scene with such skill and vigor. Even straight-forward death metal fans will definitely find enough here to sink their blood-soaked teeth into as well. Amazingly, Vae Victis is self-released. Major metal labels like Century Media, Nuclear Blast, and Metal Blade are dropping the ball and will be kicking themselves when (not if) another label snatches them up.“- Toilet Ov Hell

“2021 could be the year for Akiavel, then, a group of French upstarts who are keen on leaning into the genre’s heavier side (think: later At the Gates and Carcass). On their latest single, “Frozen Beauties,” the band expertly weave Amott-worthy riffs and composition with roaring, dynamic vocals, and the result is hard to turn away from: this band’s got something. And cyclical trends being what they are, the time could be right.“- Metalsucks

“Hailing from the south of France, the gentlemen and lady of Akiavel belie their dapper and sophisticated dress sense with a groovy and demonic salutation to the death and  thrash metal of old and new. Their latest and second full-length, Væ Victis was released back on April 23rd and the band have been promoting it as relentlessly as possible by slapping themselves all over a broad number of online, print and podcast media in both English and their native tongue. Let’s not forget their breakthrough appearance at Metal Injection’s Slay at Home Fest back in February, at which they so impressed that they’ve been invited back to help with the Slay at Home finale, starting tomorrow.“- Decibel

“This is female fronted and modern but nothing like the others in the genre. If you’re looking for melo-death that offers something unique, this could be for you. Check it out!“- Metal Rules

AKIAVEL is a Melodic Death Metal band from the South of France, formed in 2018. The band released their first, self-titled, EP in December 2018, showcasing their trademark sound: a mix of Groove, Thrash, Black and Old-school Death Metal, with a touch of melodic riffs, heavy rhythmic and hardcore sounds.

They draw their inspiration from bands such as: Morbid Angel, Deicide, Obituary, Cannibal Corpse, Testament and Gojira.

AKIAVEL’s debut full-length album, “V” was recorded at Studio Artmusic and mastered by Kohlekeller Studio, and was released on 20 February 2020 on Mystic Production. Acclaimed by critics, they immediately found their footing in France and abroad. A genuine and balanced expression of melodic metal and brutal violence. Julien Truchan (Benighted) makes an appearance on the track “I & Me”.

Each of the 4 AKIAVEL members has a strong and varied experience in the French metal industry that give them a unique and powerful sound. The band is sponsored by several tier-one brands (Darius Guitarz. Dominger Pickups USA, SP Custom, Skull Strings, ProOrca drumsticks) and is supported by the custom-made Lalite drums.

AKIAVEL made their first stage appearance at the Hellfest Off festival in Clisson on June 2019 (Stéphane Buriez (Loudblast, Sinsaenum, Les Tambours du Bronx) joining the band on stage for 2 mythic covers) and participated in the charity Metal Help Fest 2 in September 2019 at the Secret Place (Montpellier).