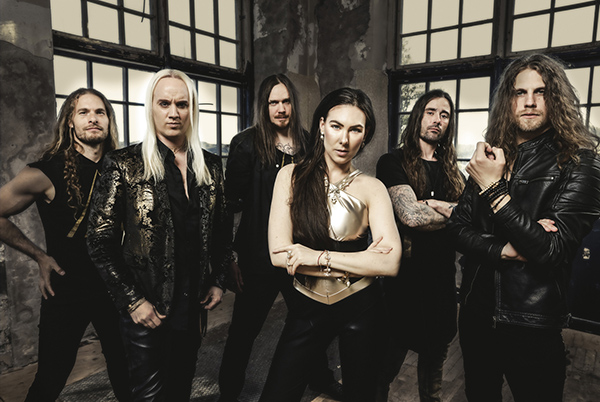 The day has finally come for AMARANTHE to share their declaration to the world: The Swedish metalheroes’ most epic album to date, “Manifest”, is out today!

AMARANTHE commented:
“So, we come to it at last! We are so very proud and happy to finally unveil ‘Manifest’ to the world, an album written with so much pure joy and enthusiasm, and yet very nearly did not see the light of day. When faced with the decision to record the album despite a world wide pandemic, the answer was the same as when we canceled tours that were supposed to promote the album: we HAVE to release this album in 2020! As our long-time listeners are well aware of, AMARANTHE believes in positive, energetic and uplifting music, and we feel that such sentiments are more needed than ever before! Easily our most confident and convincing album to date, this is music born out of pure passion and eagerness to create. This is our manifesto, and all our aesthetic aspirations made apparent – this is ‘Manifest’.”

To celebrate the glorious news, the band also releases a stunning music video for ‘Fearless’ that can be watched here:

AMARANTHE added further:
“Fear – perhaps the most primal of instincts and most ancient of proclivities, and yet despite all our recent technological marvels our tendency towards fear only grows. Perhaps the great paradox of our time: we have never been materially safer, yet never more exposed to the ills and misfortunes of our truly global civilisation. This very primal urge is pure currency for both political and financial gain, and the more we give in to fear, the more it enslaves us. However, inside each and every one of us there is also courage, conviction and determination. It is in the face of adversity that we grow the strongest – so heed your inner warrior, pay homage to bravery – and transform into the ‘Fearless’!”

Each vinyl color was personally selected by the single band members and is a bold statement for which value is the most important to them: Creativity, independence, prudence, cleverness, single-mindeddess and composure. All together, these values are the foundation to overcome obstacles and face difficult and uncertain situations. To symbolize that, every vinyl comes with a “hero card” corresponding with the band member and their personally picked value. When all six cards are united, they form the album cover for “Manifest”. The colours include:
Red w/ Gold Splatter (Olof)
Clear w/ Red Splatter (Elize) *Sold Out*
Green w/ Black Splatter (GG6)
White w/ Blue Splatter (Nils)
Pink w/ Green Splatter (Johan)
Orange w/ Black Splatter (Morten)
AMARANTHE have spent the last decade establishing themselves as a formidable, positive and fervently melodic force for metallic good. From their explosive self-titled debut in 2011 to the more sophisticated, streamlined likes of 2014’s “Massive Addictive” and its immaculate follow-up “Maximalism” (2016), AMARANTHE have masterfully blurred the lines between melodic metal, crushing brutality, cinematic sweep and futuristic sparkle. Led by the endlessly ingenious songwriting of guitarist OlofMörck and powerhouse vocalist Elize Ryd, their rise to prominence has been a joy to behold.
Widely acclaimed as a dazzling live act, the Swedes reached a new peak of creativity on 2018’s hugely successful “Helix”: an album that pushed the band’s vision to new heights, breadths and depths, while showcasing the brilliance of Elize and her co-vocalists, Henrik Englund Wilhelmsson and recent recruit Nils Molin.
Not just a glorious return but a wholesale upgrade for their exuberant sound, “Manifest” is simply the most daring, dynamic and unforgettable album that AMARANTHE have released to date. The perfect antidote to the nagging anxieties plaguing us all in these troubled times, it’s a Technicolor celebration of metal’s ageless power, blazing with all of life’s colours and chaos, but delivered with utmost artistry and skill.