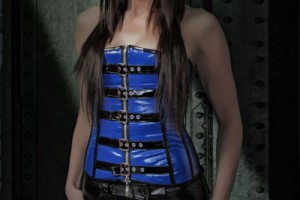 Finnish Symphonic Power Metal band has announced their new vocalist (after the departure of Heidi Parvianen) and the recording of a compilation album, read the following statement from the band and mainmain Tuomas Seppälä :

“Hey all. As announced recently we have spent quite some time with the search for a new singer. A pretty hard task, but we think we managed to find an extraordinarily talented singer. We are very proud to present you Capri! She is from Finland and a professional vocalist with a strong background: she has worked for a vast amount of different kinds of studio- and live-projects (musicals, lead and backing vocal recordings, live shows etc). Capri has a classical training but is still 100 percent a rock singer. We are sure she will bring AD to a new level by interpreting AD songs with a different kind of style and emotion.”

Here’s something more for you eyes and ears. A teaser video of Capri singing some AD songs.

And since we all thought that Capri can sing those “classic” AD songs with new and refreshing style and sound, we decided to re-record a selection of our best songs again with her. Also 75 % of the music stems are going to be re-recorded. Mikko P. Mustonen, who did orchestral arrangements for our previous album (“Circus Black”) will add some more colour to those songs with awesome orchestral additions. He’s also going to mix this album. Release dates, track listing and cover art are to be announced later.

“Founding Capri and getting her join AD is like a big dream coming true to me. Capri shares the same taste in music as I and that’s why is obvious that our new partnership is like “match made in heaven”. She really makes my compositions to shine like never before and I’m so impressed about her every way. I’m as excited as back then, when I found our original singer Heidi. Now my main focus is to make the whole world to hear about Capri and start composing new songs for her. But first, we’re all concentrating on recording this compilation album with Capri and then I’ll start working with new material for new studio album “