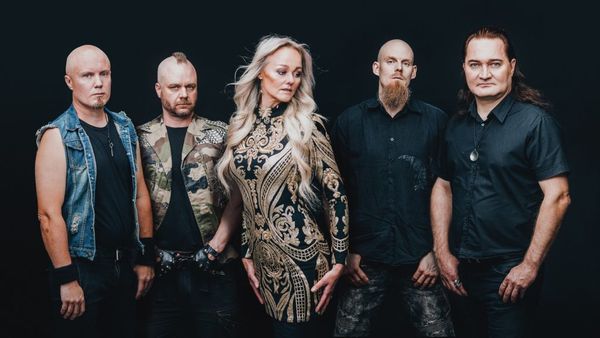 Grab a Copy of the New Covers Album, Take A Chance – A Metal Tribute to ABBA, Now!

Even after the release of the band’s three successful singles “Gimme! Gimme! Gimme! (A Man After Midnight)“, “SOS” and “Super Trouper“, ABBA-metal force AMBERIAN DAWN is still not finished taking you down memory lane! Bringing you to the dance floor once again, their fourth single, “The Day Before You Came”, explodes with more ABBA love as the band lays down heavy guitars and drums alongside nostalgic 70s synths and beautiful vocal melodies.

The cover version of the very successful track is mixed by the legendary Mikko Karmila at Finnvox Studios and mastered by Emil Pohjalainen, and arrives alongside an exciting lyric video cut straight from the latest album!

The group took their chance and laid down all of their love on their newest covers-packed album, Take A Chance – A Metal Tribute to ABBA. Combining nostalgic earworms with their dashing trademark sound, the Finnish quintet enchant fans with their renditions of cheerful ABBA classics. Go grab a copy of the new album, out now via Napalm Records!

Not only has the album garnered the band a CNN.com feature, it has also presented them with the great opportunity to play on the legendary heavy metal cruise, 70,000 Tons of Metal.

This extravagant event at the end of January brings metal fans from around the globe together to the sunny sceneries of Miami and the Caribbean, all with amazing metal bands playing throughout the cruise – and this year, including the great AMBERIAN DAWN!

AMBERIAN DAWN on the new single:
“This song is my absolute favourite track on the album. It’s a very dramatic and sad song. The feeling and the atmosphere is very Amberian Dawn- like with all the fullness and emotion in the sound. Capri does a perfect job with her singing, once again.”

Watch the lyric video for single “The Day Before You Came” HERE:

Continuing their legacy from the previous album, Looking For You (2020), AMBERIAN DAWN have assembled to introduce ABBA-Metal, proving the band does not shy away from experimenting with genres while still staying true to their metal origins.

Dashing drums ensure a high-paced experience that expresses the band’s identity without losing the catchy ABBA-reminiscent keyboards, renowned lyrics and nostalgic feeling of the original. Including evergreens like “Mamma Mia” and “Super Trouper“, AMBERIAN DAWN enchants with a variety of tracks.

Representing a wide array of ABBA songs from high energy to moving metal ballads like “Like An Angel Walking Through My Room“, the band delivers astounding ABBA-Metal to a broad audience. So Take A Chance on AMBERIAN DAWN‘s new album and get lost in the glorious new metal world of ABBA.

Tuomas Seppälä on the album:
“This was a ‘must do album’ for me. We had so much fun in 2019 working on our first cover song ever (which was ABBA‘s ‘Lay All Your Love On Me’), that it was easy to make a decision to continue with a full ABBA covers album. The songs have been carefully selected, there’s a couple of big hit songs of course, but some of my personal favorites, like ‘The Day Before You Came’, are also included. The recording project was eventually a really big challenge for all of us and needed a lot of work, but we’re all 100% satisfied with the results. This album really sounds like an AMBERIAN DAWN album.”

Take A Chance – A Metal Tribute to ABBA track listing: