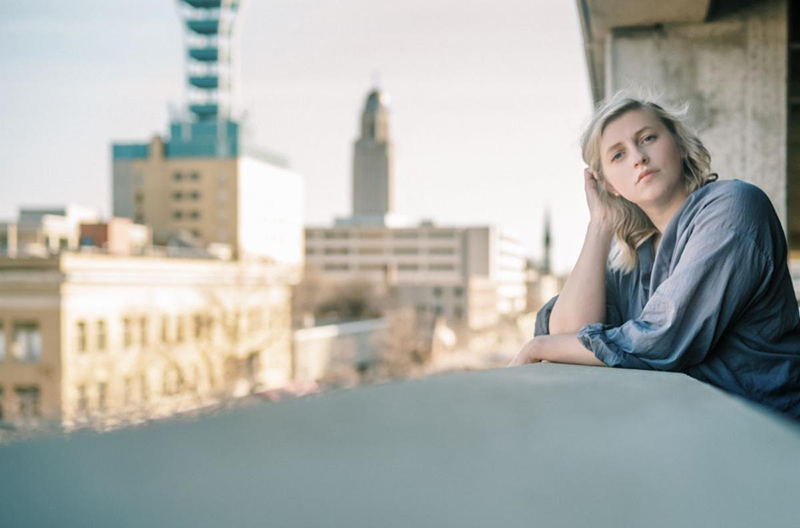 She had previously shared a number of album tracks highlighting the record’s incredible breadth – including “That Spell,” “Water Flowing Downward,” “Take Back Thy Gift, “Of Him I Love Both Day and Night” and the Beach Boys cover “Don’t Talk (Put Your Head On my Shoulder).”

This week she also announces her performances during the annual Americana Music Festival in Nashville, TN. She’ll perform twice on Saturday, September 25th with the first performance taking place at Musician’s Corner at Centennial Park at 3:25 and later at the High Watt at 7PM.

Fresh off a summer of tour dates including a transcendent appearance at the Newport Folk Festival and shows in New York City and Washington D.C., von Kampen will head out on tour opening for the Wood Brothers. Shows kick off Sept 16th in Houston, TX. The tour will be followed by dates with singer/songwriter Joe Pug.

Andrea von Kampen burst onto the national stage via NPR’s Tiny Desk contest – an opportunity for unsigned talent to win a spot on the famed music discovery series. Though she didn’t ultimately land the prize, she was named as one of the top ten entries, and in the process netted a whole new fanbase. Since then, she’s released EP’s, singles, a self-released debut LP and found great success with film and television placements due to her intimate and cinematic music.

The Nebraska-raised singer-songwriter is a formidable talent with her deeply felt folk-indebted sound and inquisitive, empathetic lyrics. Andrea excels at connecting the dots between personal experience and the world at large. Her journey so far has been a life immersed by music.

The youngest of four children raised in a musical family, Andrea and her siblings all learned instruments as she started playing guitar at a young age. “Music was just what we did,” she remembers, and on That Spell, she continues the familial collaboration by bringing in her brother David to work on string arrangements and the album’s stunning production. Inspired by nature and often employing deep literary references in her work, von Kampen’s music is emotional and reflective.

Entering That Spell is a walk in the woods during magic hour – a dream conjured by a supremely gifted singer-songwriter, one of the year’s most exciting new arrivals.

Andrea von Kampen’s That Spell is an emotionally evocative powerhouse. It’s cinematic and sweeping-  with literary references, reflections on nature and above all the ability to transport you to a memory, a place in time or somewhere you saw in a dream with vivid lucidity.

Like a film director, she works as an aural auteur building scenes with her rapturous voice and the plaintive plucks of her guitar strings. With these ten songs, the Nebraska-raised singer-songwriter immediately establishes herself as a formidable talent with her deeply felt folk-indebted sound and inquisitive, empathetic lyrics.

Andrea excels at connecting the dots between personal experience and the world at large, and it’s what makes That Spell such an instantly memorable breakthrough to experiencing her artistic state of mind and the worlds she builds in her music.

The fact that That Spell achieves such cohesion and confidence is no accident. It’s the culmination of a life immersed by music. The youngest of four children, Andrea and her siblings all learned instruments—a byproduct of their musician mother and choir director father.

Their parents fostered a love of music but it was also the family business – and the generational passing down of the skills they’d honed to their children was a given and a blessing. Andrea’s instrument of choice was the guitar and she picked it up at a young age.

“Music was just what we did,” she remembers, as she absorbed the work of vocal jazz icons like Etta James and Ella Fitzgerald as well as folk-pop legends Paul Simon and James Taylor—both of whom, like Andrea, are also part of the Fantasy Records family.

Andrea wrote her first song, the inquisitive and quietly glowing “Trainsong,” in college—which set off a creative spark that’s fueled her since. “Ever since then I’ve looked daily for that hour to read, write, listen, and be intentional with keeping my creative muscle working,” she explains.

In 2015, Andrea released her debut EP Another Day, and the following year she submitted a performance of “Let Me Down Easy” to NPR’s Tiny Desk Contest that was shared by All Things Considered. After a steady stream of EPs that included 2016’s potent Desdemona, her debut album Old Country followed in 2019; since then, Andrea’s also starred in and composed the soundtrack for the forthcoming film Molto Bella and has accrued hundreds of thousands of regular Spotify listeners worldwide.

That Spell was begun shortly after the release of Old Country and worked on throughout the COVID-19 pandemic. After building the melodies and writing the lyrics, she turned to her lifelong collaborator—her brother David, who composed string arrangements and worked with Andrea to build out the instrumentation that would ultimately fulfill her vision.

An album that radiates quiet luminescence while possessing undeniable power, That Spell concerns itself with themes in a way best described by Andrea as “A response to what was going on politically, as well as reflecting on my childhood.”

Indeed, That Spell features Andrea’s ruminations on ecology, classism, and adolescence, as she wields an empathetic lens through which she transmutes these ten melodic reveries.

First single “Water Flowing Downward” is teeming with gorgeous keyboards and Andrea’s floating yearn of a voice: “I was humming this old tune and I just penned lyrics to it, which I never do,” Andrea recalls on how the contemplative song came about. The song’s lyrical content was inspired by the Oscar-winning film Parasite—specifically, the way the film uses water as a metaphor.

“It was a useful tool for the wealthy, and something that could destroy people who aren’t wealthy”, she explains.

“I was inspired by the way that spoke to class discrepancies.” The deceptively airy-sounding title track was similarly inspired by Andrea’s recent readings on gender equality issues in society.

“It was my response to all of the times as a female that I’ve been at the whim of people with more power than me”, she states. “I’m so done with that, and I’m not just going to pander to everyone just because society tells me to.”

The quietly radiant “Take Back Thy Gift” was inspired by the poetry of Lord Alfred Tennyson, as well as the Greek story of Tithonius that Tennyson once wrote about himself.

“It felt like an ancient cautionary tale that I wanted to breathe new life to”, she explains. Later on the album, Andrea offers a lush and gorgeously dreamy cover of the Beach Boys’ classic Pet Sounds cut “Don’t Talk (Put Your Head on My Shoulder)”, adding her own texture and personality to the unforgettable tune.

The honeyed melody and lush instrumentation of “Carolina”, meanwhile finds Andrea drawing from James Taylor’s musical influence on her childhood, as well as realizing the power of music at large: “When I was growing up, whenever that song would come on the radio, my whole family would reverently pause for it. That was a taste of realizing that sometimes songs mean more than just what it seems on the surface.”

What she took away from that experience not only informed “Carolina” but the artistic ethos that courses through That Spell as a whole: “I realized that songs have power, and that I wanted to have that effect on people, too.”