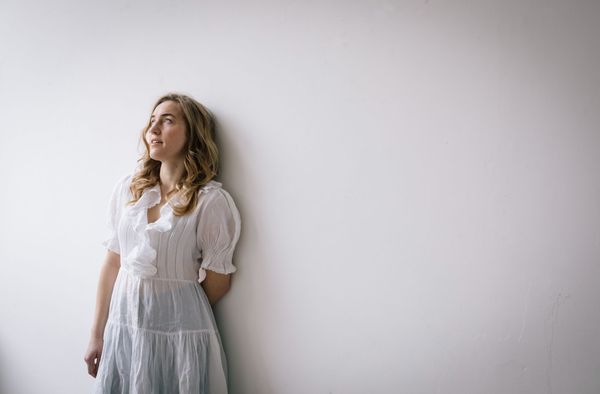 Today, the singer, songwriter, and poet Anna Westin, who hails from the UK by way of Canada, has released the second single from her upcoming album, LEV (the Hebrew word for “heart”).

The single, “Bright Burning Mess“, which also opens the album, begins with some of Anna’s spoken word poetry, creating an atmosphere of intimacy and setting the thematic tone for the record as a whole.

As the spoken intro of the song slowly gives way into a sturdy folk rock groove, Anna Westin‘s entire musical style gently unfolds before you, drawing the listener with some of the album’s catchiest vocal melodies and lush backing instrumentation before dissipating back into the ether as Anna’s poetry returns in the track’s outro.

Speaking to her inspirations for “Bright Burning Mess” and how the process of creating this song was the moment that unlocked the album as whole, Anna writes:

“At first it was just a collection of songs. It was only later that the more recent songs brought it into a whole concept for an album. So, probably sitting in my new flat in Margate, wondering whether I should have moved to a town I didn’t know by the sea, excited about the possibility of what was next, mourning an old love.

I remember distinctly – the flat, with one sofa, before the furniture was bought – the cold blast of sea air, the sense of anticipation, and making sense of a few dreams that I kept having. That’s where ‘Bright Burning Mess’ started, and where the album emerged essentially.

There’s a Turner painting of the sea bed that reminds me of the movement of the piece – where Turner paints this churning brown muck that is caught up in the crystal blue storm sea, and there’s a bit of that in the piece – a sense of the underriding ‘stuff’ pulled up from the deep, and the clear blue that transmits its own burning brightness of light across the horizon, reflecting sunset and moon and light and the vastness above, as it settles, as the day clears, like when we are going through something that causes the foundations to be broken up, and then find that we are on the other side, that the sea within has settled, and we are in the middle of a burning glorious brightness. All just feels like it has settled – like it is well again.”

As songwriter and poet, she has also produced scores for several British short films and has toured North America and the Middle East, performing at many well known music venues throughout the UK. She has shared the stage with a number of performers, including Pete Doherty, Josh Flowers, Roo Panes, Griga Cucic and Robert Logan.

Currently based between the Canadian East Coast, and London, UK, Anna’s latest album LEV was produced by Voka Gentle‘s Ellie and Imogen Mason (Mara Simpson), mixed by Marcus Hamblett (Villagers, James Holden, The Staves, This is the Kit), mastered by Harris Newman, and also features Rob Pemberton (The Staves, Rachel Dadd, Willie Mason) and Joanne Clara (Roo Panes) among others.

Her first album, NORDEN, was celebrated for capturing a “spatial surrealistic lure of minimalism” and also featured Deborah and Roo Panes as guest artists. In addition to her work as a poet and musician, Anna has a PhD in philosophy, lectures and speaks internationally, and is actively involved in anti-trafficking activism as the director of The JAM Network UK.

Anna Westin‘s music draws inspiration from the Irish, choral and Swedish folk songs that she grew up with and brings them into the world of more modern and experimental indie folk, “trying to combine something ancient and almost monastic with something totally contemporary. A blending of time to create something beyond time”.