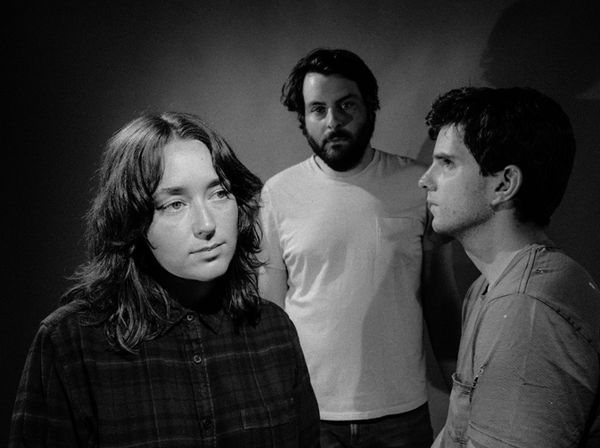 Out 5th August via ANTI-Records

Today Art Moore, a new project from Taylor Vick a.k.a. Boy Scouts, and Ezra Furman collaborators Sam Durkes and Trevor Brooks, announce their self-titled debut album that’ll be released via ANTI- on 5th August. To mark the announcement the band are sharing new single ‘Muscle Memory’ with a video with a video directed by Rocco Rivetti.

The single is the album’s opening track, and fittingly the first song the band wrote as a group. It’s a beautiful example of the way that Vick’s critically-adored songwriting blends with the new context provided by her Art Moore bandmates, finding a new sense of scale and grandeur amidst sweeping, synth-specked arrangements.

“Muscle Memory was inspired by the many phases of life we go through and the friendships that exist within them that inevitably transform as we continue through life,” Vick explains. “I wanted to write about this experience from a neutral perspective, one with the belief that it’s neither a good or bad thing but simply a given in life. It’s a more fictionalised version of my personal experience which was the kind of writing I gravitated towards most in this band.”

Art Moore make vivid, heartbreaking short stories. Each song on the newly formed three-piece’s self-titled debut album is its own individual universe of bittersweet feeling: a brief snapshot of a moment in time that captures the fragility and occasional impossibility of human connection.

The result is a world of remarkable emotional complexity, an album-length study of loneliness, heartache, and loss that’s sweet but never saccharine, sad but never maudlin.

Featuring the inimitable songwriting of beloved Oakland luminary Taylor Vick of Boy Scouts set in sharp relief against lush production from Ezra Furman collaborators Sam Durkes and Trevor Brooks, it’s a quietly wondrous record — a set of songs that sketch out the struggle and beauty of coping with everyday life.

Durkes, Brooks and Vick first set out to collaborate with the intended goal of pitching their music for film and television projects. Durkes had just completed work on Ezra Furman’s soundtrack for the Netflix series Sex Education and knew Brooks through his work on her 2019 record Twelve Nudes.

The pair already knew Vick, who had established herself as a prolific cult solo artist with Boy Scouts, and asked if she would be interested in assisting for their gestational soundtrack project. The idea of Art Moore, as a band, or Art Moore, as a cohesive, ingratiating record, was still a ways away.

“We all met up at the studio, and it was never even like, ‘Let’s be a band’, that was never a thing,” recalls Durkes. “It was more like, ‘Let’s write for movies and art projects’ — let’s think of a movie scene or a photograph or still image and see if we can write some shit around it to see if we can pitch it.”

Decamping to a studio in Oakland in January 2020, it quickly became clear that the three musicians worked well together. They fell into an easy rhythm: Brooks and Durkes would work on a track from the instrumental demos they had made together, while Vick sat outside, writing hooks and lyrics.

When she was done, she would come inside, lay down what she had written, and the process would repeat. The trio’s remarkable efficiency gave them confidence that they could work on something larger than just a few songs to pitch for syncs.

“Four songs in, I think, after the first recording session, we realised it was going well, and it was pretty efficient,” says Brooks. “Making music with both Sam and Taylor has always been so easy. I record other artists, and it’s pretty rare to be so quickly on the same page with people. We don’t have to say much — we kind of get where each other is coming from. It happens way too easily.”

A mutual admiration for each others’ work guided the initial days of Art Moore, says Durkes. “Taylor can just nail harmonies right off the bat, like, no bullshit — it’s an incredible skill,” he says admiringly. “It’s amazing to see, because a lot of singers, they gotta work at it a lot harder. Taylor works at it too, but it seems so fucking effortless.”

Far from impeding their progress, the pandemic turned out to be a key factor in the overall palette of Art Moore. Confined to their homes, Brooks, Durkes and Vick were forced to send recordings to each other over email, working without the immediacy of in-studio time.

Working separately, a more digital aspect to the music began to emerge, taking Art Moore from a down-the-line indie-rock band into wilder, more mutable territory. “I think [the pandemic] also probably contributed to the whole idea of like, ‘Well, we might as well just make an album, ’cause it’s July and things aren’t any different’,” Vick says. “We were still at home, so we thought we might as well keep using this time.”

Writing synth- and drum machine-led songs for the project proved to be a kind of full-circle moment for Brooks, who, prior to Art Moore, had spent time making ambient music as part of the Bay Area experimental electronic group Awefekt.

“I spent a few years where I sort of left the whole indie-rock [world] and I was making a lot of ambient synth and improv modular stuff,” Brooks recalls.

“I realised through that process that I really missed writing more traditional songs. Part of wanting to do a new project, a band type of project, was to get back to making structured pieces of music. My initial idea was like, guitars, drums, bass and a little bit of synth here and there, but it turned a little more into synth world as the pandemic happened.”

The electronic elements that gild Art Moore are subtle, but add distinctive shading to each story. The strobing synth pulse that undergirds ‘A Different Life’ shifts the weight of the song dramatically from a heartbroken lament to something that bristles with the endless possibility that comes part-and-parcel with a breakup.

‘Something Holy’’s dubby drum machine beat places it in the realm of atmospheric ambient pop a la HTRK or Tropic of Cancer, while the rhythmic electronic spines of ‘Rewind’ and ‘October’ place Taylor’s inventive vocal phrasing in a milieu closer to R&B than indie rock. None of these ideas feel out of place on Art Moore: instead, each song feels like it was given time to grow into itself.

It’s fitting — or deeply ironic — that such a wealth of time would be such a significant factor on an album that often seems uniquely concerned with the way time can leave people behind. The protagonists of the stories on Art Moore deal with quiet abandonments and casual breakups, the kinds of emotional schisms rarely explored in song.

Lead single ‘Snowy’, one of Vick’s most incisive and evocative songs ever, focusses on a widow embarking on a road trip without her partner for the first time, slipping between nostalgia and bitterness in split seconds. Lush highlight ‘Sixish’ sketches a similarly resigned kind of heartbreak, its protagonist feeling shortchanged by a manipulative friendship but unable to divorce themselves from it.

“The way the chorus of ‘Sixish’ sounded to me at first listen was heartbreaking, so I wanted to write lyrics to match that feeling,” Vick recalls. Art Moore finds her writing fiction in song for the first time — but the emotions at the core of these songs always ring profoundly true.

“I think a universally heartbreaking experience is having conflict within a close friendship (or any intimate relationship) where you feel like you’ve got an infinite amount of love and energy to give to someone but they’re not able to reciprocate for whatever reason.”

Songs like ‘Sixish’ encapsulate the depth and beauty of Art Moore. These are songs about tiny, unspoken feelings rendered on a grand scale, moments that often get brushed aside given the weight that they should be.

Across these ten stories, Vick, Brooks and Durkes are unsparing in their focus but remarkably generous in their artistry — three pairs of steady, even hands crafting one fine, precious object.