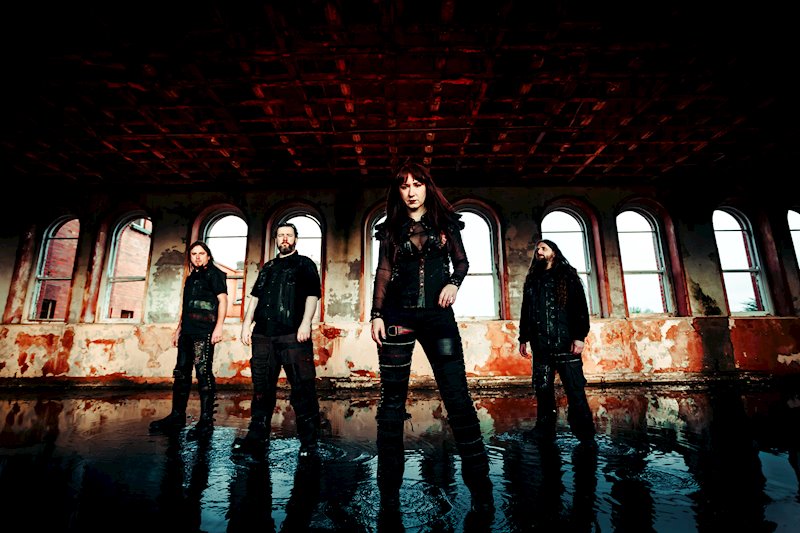 Last Friday the first ASCEND THE HOLLOW single “Prisoners Of The Storm” has been released along with the dark and relentless music video. Now the new metamorphosis of the Female Fronted Progressive Cyber Tech Metal band (ex-Xerosun) gives a first sinister insight with the new album teaser into the album “Echoes Of Existence” which will be released on June 7th, 2019 through Dr. Music Records. ASCEND THE HOLLOW impress with their music driven by 9-string guitars, 6-string basses and modern electronic soundscapes as they ascend into a new era. Rounded off by a diverse mixture of grunts, screams and a melancholic, clear voice, they combine their eclectic influences to a powerful, aggressive yet melodically intrusive and innovative sound. But now get whisked away by M-NOISE (vox, lyrics), RAVEN (guitars, programming), GEF (guitars, programming) and DAVEC (bass) into the threatening atmosphere: https://youtu.be/SauKMix9Kxo

ASCEND THE HOLLOW are fearless and fierce, rising strongly from the ashes, reborn and taking responsibility for their self-reinvention. They are the power that lies dormant in every one of us. They do not give up and do not accept failure. They have the power to Ascend The Hollow and reach towards the sun. The fans of the four European musicians can look forward to ten brutal and intense songs in a breathtaking Metal sound. Partially produced by Kris Norris (Darkest Hour, Scar The Martyr, Shadow Domain) as well as mixed and mastered by Thomas ‘Drop’ Betrisey (Samael, The Erkonauts, Sybreed) the album will cause a storm in the scene when it is released in a few weeks! The Tech Metal Maniacs will definitely gain new fans. The songs on “Echoes Of Existence” are altogether an intense and fierce trip into the abysses of contemporary culture and the depths of human existence. The journey leads into the dark sides of humanity, into a world dominated by technology and progress. The album is about taboos such as mental illnesses and suicide, while also exploring some more uncomfortable and triggering themes like rape and child sex abuse. Not afraid to oppose the current socio-political climate, the central message is mental health and human rights awareness. There are some bands who pursue this approach, but only a few succeed so forcefully, relentlessly and brutally. ASCEND THE HOLLOW will join the first league of the hard Metal scene with this masterpiece!

The latest news and upcoming tour dates will be announced on www.ascendthehollow.com and www.facebook.com/ascendthehollow. A regular trip to the online worlds of ASCEND THE HOLLOW is therefore recommended. Further information and background facts about the extraordinary band can also be found here.