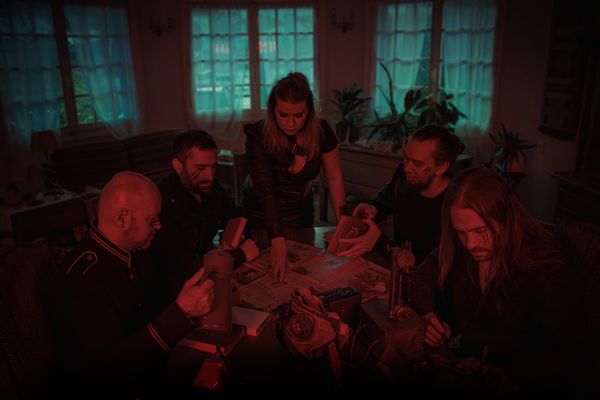 French Modern Power Metal band ASYLUM PYRE releases new Single/Lyric Video for “The Nowhere Dance”. Be ready for an energy boost! Always more and more again – until the excess and the pain… A catchy track with a powerful chorus, carried by a rhythm combining velocity and modernity. A Power required to carry with it the weight of the message of this anthem to an overloaded earth,… just helped by a handful of resistant souls…

Band comments:
“This song as a special status in JAE’s heart. It’s probably his favourite on the new album, due to its chorus and the pleasure taken to co-design the verses in a teamwork with OXY. Verse that contains some funny elements!”

Band comments:
“This 5th book of our adventure is the logical follow-up to the successful “N°4”
But even catchier! Both softer and harder while still exploring new horizons.

Distributed through Season Of Mist, the cover is the art of Mr Mickey Mythrid Art”.

A wind of change over the metal sphere. Power, melody, emotions. A perfect mix of modern and traditional metal led by an extraordinary lead vocalist allied with an unbelievable variety in atmospheres.

Asylum Pyre plays each song as if it were the last, as if its life was on trial. A rare intensity and choruses that will all stick to your head.

Add to this a whole pre-apocalyptical universe in which each band member plays a double-game character and you’ve got an intense and unforgettable artistic experience!