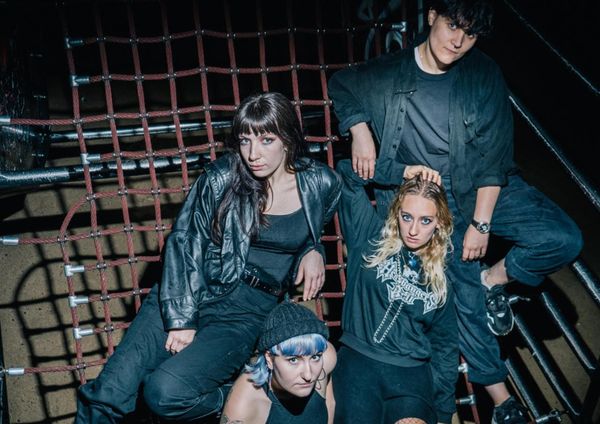 BABY OF THE BUNCH: album streaming

BABY OF THE BUNCH: Pretty But It Has No Use LP By German Riot Girl/Pop Act Out Today; Album Streaming In Full + “Happy Here” Video Playing

Stream BABY OF THE BUNCH’s Pretty But It Has No UseHERE.

Pretty But It Has No Use, the debut LP from Leipzig/Berlin, Germany-based BABY OF THE BUNCH, is out today.

Taking the band moniker from a line in The Sugarhill Gang’s “Rapper’s Delight,” BABY OF THE BUNCH was founded in 2015 in Leipzig by four fifteen/sixteen-year-old teenagers. The band describes their influences and sound as a blend of 1990s indie rock, riot girl, new wave, and pop.

The band released two EPs in 2018 and 2019 and four singles between 2020 and 2022. With the track “Banana Ice Cream,” they began to see streaming and indie radio success in Germany, and their Spring 2020 single “Ur Mom” saw solid airplay in Germany and in the US via NPR radio.

The Fall 2020 single “I Like That” saw very good prime time radio pickup and now sits with more than 200K streams at DSPs. Following special radio concerts and sessions with Deutschlandfunk Nova and MDR Kultur, the Spring 2021 single “Chapstick Girl“ became an indie hit within the LGBTQA+ community.

BABY OF THE BUNCH now presents their debut album Pretty But It Has No Use. The eleven-song album was produced by Thies Neu at Tonbrauerei Berlin and mastered by Philipp Welsing at Original Mastering Hamburg.

The record is out now on CD, digital, and 45rpm audiophile cut vinyl through Believe Music on behalf of Revolver Distribution Services. Fans of Team Dresch, Bratmobile, Bikini Kill, Babes In Toyland, and Sonic Youth, check it out.

Stream BABY OF THE BUNCH’s Pretty But It Has No Use now at Spotify HERE. Also see the video for the LP’s lead track “Happy Here” at THIS LOCATION.

Pretty But It Has No Use Track Listing:

“I’m In A Band,“ by BABY OF THE BUNCH, is a song we wish we could play for Iggy Pop. It may not sound that much like the Stooges, but it’s hard not to imagine the King of Sling grooving on lines like, “Spent all my money on a new guitar/Now I can’t afford to pay my rent/But I’m in a band/I’m in a band/Yeah, yeah, yeah, yeah/A fucking band.”

Why a band? Guitarist Bronte and bassist Finja have a few answers. “We’re arrogant. We wanted people to look at us.” “We needed an opportunity to scream about stuff.” “Puberty hit us so hard, we had to form a band.” “Why a band? To be in a fucking band, man!”

So, what do they sound like, if not especially like the Stooges? “Riot wave” is the name BABY OF THE BUNCH has come up with for people who need names. “Riot” as in Riot Grrls, and “Wave” because the band hearkens back even further: to the nervy synth lines of groups like Romeo Void or the Motels. And there’s some St. Vincent in the mix as well.

So just for the ladies? Get bent. “We’re not a guy’s band. We’re not even a girl’s band,” they state. They prefer Prince to Patty Smith and like Bowie, Kate Bush, Big Star, and jazz. Sometimes all at once. Bronte wants it known that they shift into 5/8 time at the end of their song “Watching Paint Dry.” Finja: “What’s that?”

You don’t need to know that to enjoy BABY OF THE BUNCH, but we checked at Bronte’s right. What else do you need to know? That they come from Berlin/Leipzig/Dresden but are a particular hit in Wiesbaden? That someone in the band studies psychology, but it’s not clear who? If it helps you to get into BABY OF THE BUNCH, go for it – and for God’s sake, go see this fucking band live. And bring your inner Iggy when you do.

BABY OF THE BUNCH: