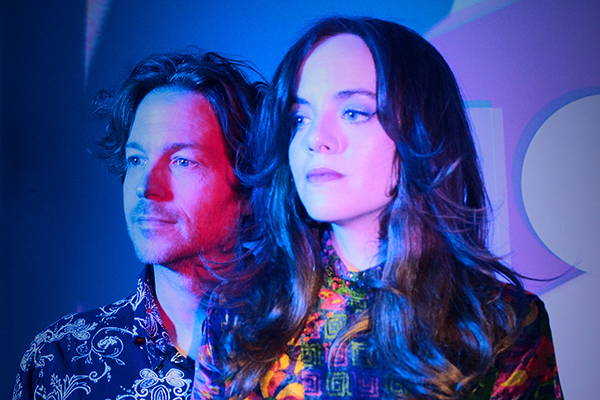 Los Angeles’ duo Bass Race has just released its new song “Chasing the Sun,”along with a space-age visualizer to help you groove through the cosmos. The band says of the track: “We were in Pittsburgh a couple years ago over Christmas to see my family and we visited our good friend Pete Mudge (Nice Rec) in his studio along with our friends Laura Herrmann and Blane Britt (GrandEar). There was a snow storm, and it was freezing. Once we were inside, we started to warm up and Pete played us some beats he had been working on. When we heard the track that would soon become “Chasing the Sun”, we all started smiling right away. The creativity started flowing and within a couple hours, I had recorded all the vocals and Steven laid down some guitars. The gray weather definitely inspired the song title, but the song lyrics detail the arduous process of overcoming writer’s block and chasing creative inspiration.”

Bass Race is the sonic lovechild of Los Angeles-based couple Steven Mertens (Moldy Peaches, Dev Hynes, Here We Go Magic) and Laura Benack. You could aptly describe their musical influences as soft yet rich and yacht yet synth with heavy echoes of jazz, funk, and soul. But stop there and you’d miss out on the more tantalizing alternate reality in which the Carpenters cheat death to evolve through the ’80s and ’90s that truly characterizes their sound. Equal parts scenescape and substance, their debut album, Tender Vittles, transcends categorization. Unfussy but far from simple, each song offers an efficient vehicle for traveling through time and memory, vacillating between dreamlike introspection and crystalline clarity. Detail-rich lyrics ground the gauzy atmosphere and add a crisp prescience to the dreamlike styling.

After meeting in New York in 2010, Mertens and Benack started dating and immediately dove into a musical partnership. With the help of friends and Benack’s brother on trumpet, they made music videos including one for their trippy, eerily playful song called “Clowns Everywhere.” Determined to use every ounce of their collective talent, they began combining their music with Mertens’ visual art in 2019. The product is the @raceofbass Instagram page, a completely unique never-ending surreal multi-media collage with animated videos as easter eggs, described by fans as “magical” and “super amazing mega fantabulous.”

Steven Mertens formed his first band, Satan’s Rats, at the age of 13 with elementary school friends, a project that led to two decades of tours and collaborations. After studying Studio Composition at SUNY Purchase, Mertens joined the Moldy Peaches in 2001 and went on to direct videos for a range of iconic artists including Regina Spektor, Lil Peep, Benee, and Sheryl Crow. Benack started playing piano at the age of four, but her natural ability to cultivate a distinct ethos predates her. Her style is in part defined by a musically rich family tree that includes Benack’s bandleader grandfather, vocalist mother, and jazz playing brother and father.

Born out of pure love for each other and their craft, Bass Race vibrates with an effortless joy that’s hard to find and impossible to manufacture. Or, as Rob Belushi once told them, “When I think of cool, I think of you.”

Fun Facts
1. Steven has played bass on 50+ US and global tours for acts including The Moldy Peaches, Adam Green, Dev Hynes, Here We Go Magic
2. Bass Race’s main influence is 70s rock and soul music. Bands that have inspired them include ABBA, The Carpenters, Ace of Bass, Hall & Oates, Ween, and Foreigner
3. “House of Spirits” was featured on the soundtrack of the horror short “Dylan” starring Rob Belushi and Aimee Carrero
4. Bass Race lives in Echo Park, Los Angeles and produced and mixed “Tender Vittles” at Palomino Sound in Boyle Heights.
5. Background on album name: “Tender Vittles” is a defunct brand of semi-moist cat food that was big in the 70s/80s. “Vittles” is a slang term for “victuals” meaning food. The term is associated with the rural South, cowboys, pioneers,and mountain men. Not only does “Tender Vittles” roll off the tongue nicely, the band thought it was an appropriate metaphor for their songs which are heartfelt and sincere.