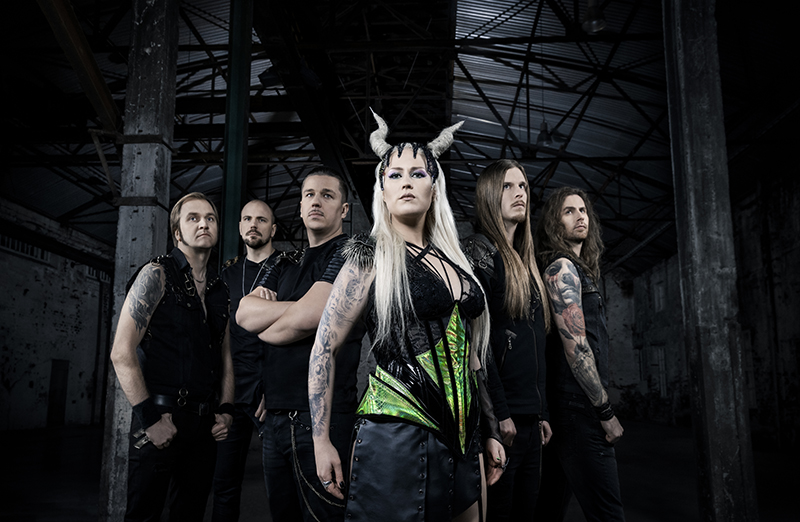 After re-signing to Nuclear Blast in early 2021, the Finnish heavy metal sextet BATTLE BEAST are once again getting ready to unleash their force upon the world in the shape of their brand new masterpiece “Circus of Doom.”

The album is set to be released on January 21st 2022 via Nuclear Blast and in true BATTLE BEAST fashion, the 10 tracks blend true heavy metal with pop and rock-vibes, paired with Noora Louhimo‘s unique voice.

“Our goal was to make an interesting and absorbing album, with both lighter party songs and heavier stuff as well. In a way the whole album is like a joyful day at the circus. Full of enchanting surprises and wild carnival atmosphere“, explains keyboardist Janne Björkroth.

Today, the band reveals a stunning music video for the first single, “Master of Illusion,” directed by Markus Nieminen, that you can watch here: https://youtu.be/6sLSyTEXfCI

Get the single digitally here: https://battlebeast.bfan.link/master-of-illusion

Janne comments on the single: “The first single from the upcoming BATTLE BEAST album, ‘Master of Illusion’, is a groovy and catchy song that makes dance floors roar and disco balls explode.

The story of the song is about a self-centered, greedy, narrow-minded, and thoughtless character, who sows destruction all around without listening to or respecting others. The character may represent various things in the many arenas of power – for example, those of personal relationships, as well as in politics, and everywhere in between.

Despite these heavy themes, there is playfulness in the composition, lyrics, and production, and the small twinkle in the corner of the eye that characterizes BATTLE BEAST.”

In addition to the single release, the band also kick off the physical pre-order for “Circus of Doom” today.
Pre-order the album in the format of you choice here: https://bfan.link/circusofdoom

—-
“Circus of Doom” was recorded at JKB Studios in Helsinki, Finland and produced and mixed by keyboardist Janne Björkroth, while the stunning artwork was created by Jan Yrlund.

Tracklist
1. Circus of Doom
2. Wings of Light
3. Master of Illusion
4. Where Angels Fear to Fly
5. Eye of the Storm
6. Russian Roulette
7. Freedom
8. The Road to Avalon
9. Armageddon
10. Place That We Call Home

—-
Recently, BATTLE BEAST also announced their Circus of Doom European Tour, that will follow the album release in spring of 2022. Starting in Paris on February 15th, the tour contains 19 shows all over Europe, including three shows in the UK, before concluding in Stockholm, Sweden on March 12th.

The band comment: “The long nightmare is finally behind us and the future’s looking bright! We really poured our heart and soul in this album and can’t wait to present it to you both on record and live on stage. Damn, how we’ve missed touring!

You are all heartily welcome to this feast of joy and horrors – the Circus of Doom.”

Tickets are available at: https://battlebeast.fi/tour

Since their 2011’s debut album “Steel,” BATTLE BEAST have achieved over 200 million digital streams. Alongside the huge #1 success of their last three albums in the album charts of their home country, Finland, their last album “No More Hollywood Endings” (2019) reached a remarkable #11 in German album charts.