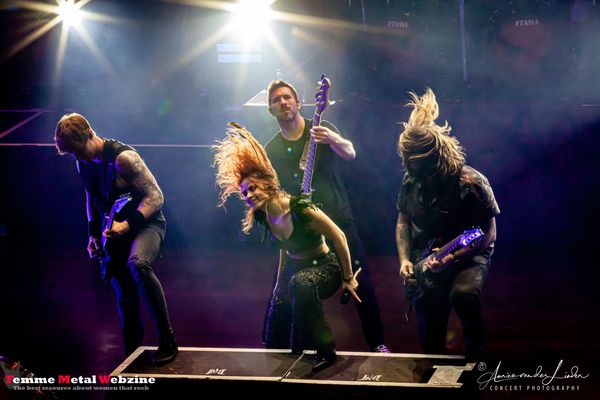 BEYOND THE BLACK: new self-titled album

Having recently finished their hugely successful European tour, today BEYOND THE BLACK release their brand new, self-titled masterpiece Beyond The Black via Nuclear Blast Records. The band also delivers a new music video for the album focus track ‘Free Me’.

Jennifer Haben comments:
„This album is the epitome of Beyond the Black and it’s arrived finally where it belongs: with our fans! We couldn’t be happier, and today we’re celebrating this release with the powerful, reassuring message of our new single “Free Me”: Never think you need to go out alone and solemly carry the weight of the world. We’re in this together and we are many!”

Order the new album Beyond the Black here: https://beyondtheblack.bfan.link/beyond-the-black
Watch the video for ‘Free Me’ here: https://youtu.be/qN51U0LvC2c

Also check out the latest releases from BEYOND THE BLACK:

German Symphonic Metal ascending stars BEYOND THE BLACK can already look back across a stratospherically successful career, despite their youthful years.

Upon release, their 2015 debut album hit like a bomb in their home country. Songs Of Love And Deathbesieged the German Top 15 for weeks, which led to the band being awarded the Metal Hammer Award for “Best Debut” in 2015. Its successor Lost In Forever (2016) entered the German charts at #4 and paved the way for a huge tour throughout Germany, and across countries like the UK, Russia and Japan.

Since the band’s live debut in 2014 they have played some of the world’s biggest Metal festival like Wacken Open Air (several times) and have toured as support to heavy weights such as AEROSMITH, KORN, SCORPIONS, SAXON and WITHIN TEMPTATION. During the campaign for their third record Heart Of the Hurricane(2018),BEYOND THE BLACK landedtheir first ever European headline tour, which took them across 10 countries, with most dates selling out.

Before they’d even finished the Heart Of the Hurricane touring cycle, BEYOND THE BLACKhad already gone back to the studio to write and record album number four. The result was Horizons,released in June 2020, which entered the German album charts at #3 (CH #6, AT #16, BE #53) marking the band’s most successful album release to date.

Now, two years later, BEYOND THE BLACK are back to launch a new chapter. Following the release of recently highly acclaimed tracks ‘Reincarnation‘, ‘Is There Anybody Out There‘, ‘Winter Is Coming’ and ‘Dancing In The Dark’, the band release their new, fifth studio album – the self-titled Beyond the Black on January 13th 2023!