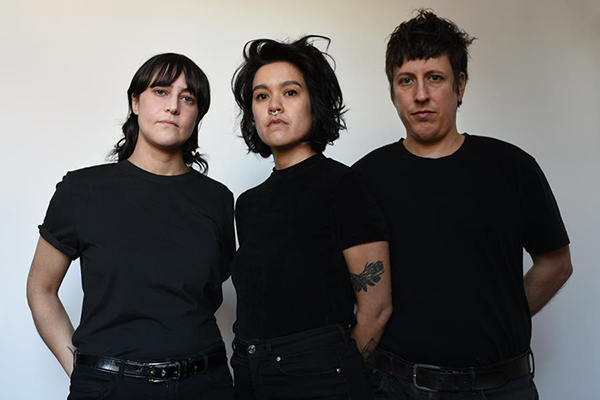 The tour includes performances at Roadburn Festival, Donaufestival and Desertfest, among others. The trio’s first nature morte single “carvers, farriers and knaves” captures the album’s striking balance between expansive atmospherics and direct emotional drive, guitar and vocals twisting atop thundering drums to create one of the most bracing and relentless pieces in the band’s ouvre.

BIG|BRAVE are an elemental trio who harness an earthen heaviness composed of distorted and textural drones, austere bombast, and Wattie’s heart-rending voice. Like recent collaborators The Body, BIG|BRAVE is at the forefront of reconfiguring the landscape of heavy music.

FIRST TRACK, “CARVERS, FARRIERS AND KNAVES” IS OUT NOW ON BANDCAMP, SPOTIFY AND APPLE MUSIC, OR WATCH BELOW ON YOUTUBE

The title nature morte is the French term for still life paintings whose literal translation is “dead nature”. BIG|BRAVE colour the songs of nature morte with unease, creating an air of beauty in decay, chords suspended in contemplative stillness.

Wattie’s experiences structuring lyrics and song forms on The Body & BIG|BRAVE’s Leaving None But Small Birds informed her work on nature morte, creating stories that, like many folk tales, are at once specific and universal. Wattie’s voice manages to be commanding and vulnerable with impressive range and intimacy.

Even her gasps carve their way through the tidal crash of Ball’s distortion wail and the pummel of Hudson’s drums. “the fable of subjugation” conveys pain through strained drones free of time, an aching minimalism that withers slowly before bursting in an outright roar. nature morte is an excavation of dark inner chasms of feelings both ineffable and visceral.

The album tackles the folly of hope, the consequences of trauma, often centres on the subjugation of femininity in all its pluralities. “It is violent and terrible. It is crushing and alarming. It is common and basic,” says Wattie. “It is catastrophic and disheartening.”

the one who bornes a weary load

my hope renders me a fool

the fable of subjugation

a parable of the trusting

the ten of swords

The momentum of nature morte conjures the image of a beast collapsing beneath its own weight before resiliently staggering upright to thunder onward. BIG|BRAVE convey heft from silence as deftly as they do from swaths of feedback and distortion to cathartic ends.

“Distortion is key,” notes Ball. The three members recorded primarily live over the course of a week at Machines with Magnets with Seth Manchester, pushing the potential of their instruments beyond expectations. For each song the trio’s song writing and attention to detail deliver its simple but devastating emotional power. On “the parable of trusting” Hudson’s cymbal clangs reverberate through Ball’s guitar, stirring out a hauntingly hollow texture.

On “my hope renders me a fool,” plumes of low growl and crooning feedback dissolve into clean pensive chords. Opener “carvers, farriers, and knaves,” delivers with the soar of guitar and voice twisting atop Hudson’s bouldering percussion creating an imposing terrain.

Across the album’s six pieces BIG|BRAVE create a tension between immediacy and patience, invoking the essence of disquiet, while conveying anguish through inventive arrangements and nuanced performances.

nature morte captures BIG|BRAVE at their heaviest and their mournful fury is at its zenith, an album where each moment is so immense and consuming that it possesses its own gravitational pull.