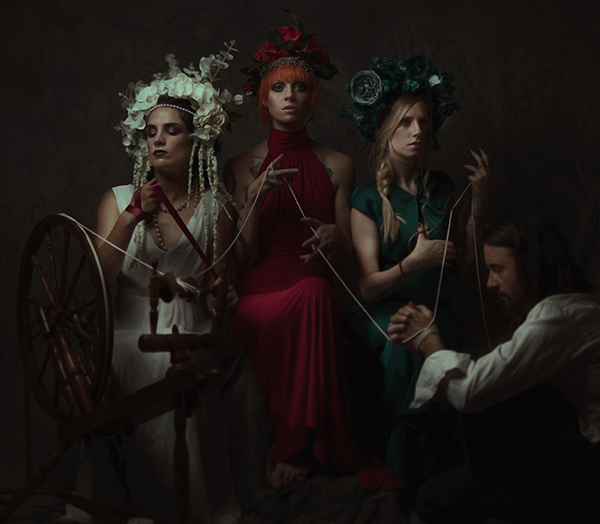 After the solo activities of their singer Mishkin Fitzgerald with the two Classical Crossover albums “Alkonost” and “The Piano Conspires”, the English Dark Progressive Rock ensemble BIRDEATSBABY returns today, on February 10th, 2021, with an extraordinary video project. This one stages “Esmerelda” from their most ambitious and unorthodox fifth album “The World Conspires”, released via Dr. Music Records, which in contrast to some of the album’s heavier tracks like “Painkiller”, exposes the softer side of BIRDEATSBABY’s musical repertoire. For this, the Brighton-based band has collaborated with Ovni Vaca, an Argentinian team of animators around art director Machi Chibán, who has admired them since their adolescent years and always dreamed of such a collaboration, throughout 2020. With themes of loneliness, betrayal and death, the animated video fits seamlessly into the world of the Dark Cabaret musicians and delivers a poignant interpretation of the tale of Esmerelda in an avant-garde comic book style inspired by the classic spaghetti-westerns of Sergio Leone. “Esmerelda” crystallized into a fan-favorite song in recent months and was originally a poem written about a dark female character. The clip is about two female lovers and a betrayal culminating in a big showdown, willing to suffer heartbreak and despair at the hands of another because you are so wrapped up in their spell that you forget yourself. Inevitably, it ends in disaster as the song reaches its dramatic climax. Musically, the band relies particularly on Hana Maria’s harp skills and Garry Mitchell’s multi-layered guitars in this fragile ballad, as well as, of course, Mishkin Fitzgerald’s beautiful voice, which invokes a feeling of longing and loss with its melodic and mournful tones, creating a deeply tragic atmosphere that is perfectly showcased in the new music video:

Produced by legendary John Fryer (Depeche Mode, Nine Inch Nails, HIM) in the Black Needle Noise Emporium Studio in Los Angeles and mastered by Bob Macchiochi (Shades, Baby Grande, Space Jesus), the latest masterpiece “The World Conspires”, which has been released in late 2019 through Dr. Music Records, is the beginning of a new phase in the musical development of BIRDEATSBABY, touching the spheres of modern Prog Metal for the first time. Reaching into these new avenues of creative inspiration, the English band fuses its genre of Dark Cabaret with harder progressive sounds without neglecting its roots. During their studies, the flame-haired BIRDEATSBABY vocalist Mishkin Fitzgerald and guitarist Garry Mitchell met and decided to start a thriving musical partnership with a mutual love of dark and progressive music. After a few line-up changes the band has now been completed with Anna Mylee on drums and Hana Maria on violin, cello and harp. Starting out in the Punk Cabaret scene, the sound progressed into an atmospheric, melancholic Prog Rock with Steampunk fragments, which excites with classical orchestral layers, bold guitars and intricate arrangements. The four musicians can always rely on the support of their cult-like worldwide fan community, aptly called ‘The Flock’. With their new studio album “The World Conspires” including the three released singles “Painkiller“, “Lady Grey” and “Box Of Razorblades“, BIRDEATSBABY have now returned with a soundtrack for the soulful, haunting, riotous celebration of life in all its facets and once again tempt new disciples into the spell of their fan cult. Open-minded music fans with a predilection for bands and artists such as Anathema, Tool, Nick Cave or Muse should definitely check out this new masterpiece and also watch the inspiring album Rockumentary!

Those who would like to get more in-depth information about BIRDEATSBABY or simply want to stay up to date on the latest news and online events, should visit www.birdeatsbaby.co.uk or the lively social media spell on www.facebook.com/birdeatsbaby, www.instagram.com/birdeatsbaby or stop by the YouTube channel on www.youtube.com/birdeatsbaby. Further details on the release of “The World Conspires” can also be found at www.dr-music-promotion.de.