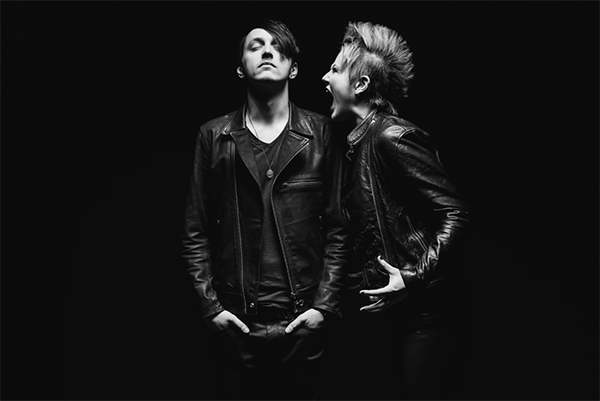 There’s something both dark and otherworldly about rock duo Black Satellite. Today, they are exclusively premiering the lyric video for “Void,” their most recently released single, via KNOTFEST. Fans can watch the captivating video here.

The track, mixed by the legendary Ben Grosse (Marilyn Manson, Breaking Benjamin, Filter), and features Luke Holland (The Word Alive) on the drums, is the first taste of the band’s forthcoming album, Aftermath. On the video, the band shares,“Our goal was to fully utilize what a lyric video could be as it’s own medium. By taking advantage of these unique elements, we were able to further explore the visual identity of the song and the album as a whole.”

Called a “rock band beyond definition” by idobi Radio, Black Satellite have been crafting mind-blowing alt-rock for over six years. Comprised of Larissa Vale (vocals) and Kyle Hawken (guitar), the band quickly formed a loyal bond that created the foundation for Black Satellite.

Black Satellite was named one of Alternative Press’ “12 Bands You Need to Know” sharing that “Frontwoman Larissa Vale offers an aggressively elegant vocal range that pairs perfectly over Kyle Hawken’s melodic guitar riffs and instrumental work. Each song from Endless effortlessly shows off the duo’s provocative sound and captivating alt-rock essence.” Additional support from the band from outlets like  Billboard ,  Loudwire , Huffington Post, New Noise Magazine, Alternative Press and more have continued to validate and solidify Black Satellite’s place in the rock world.

To keep up with Black Satellite, please visit: