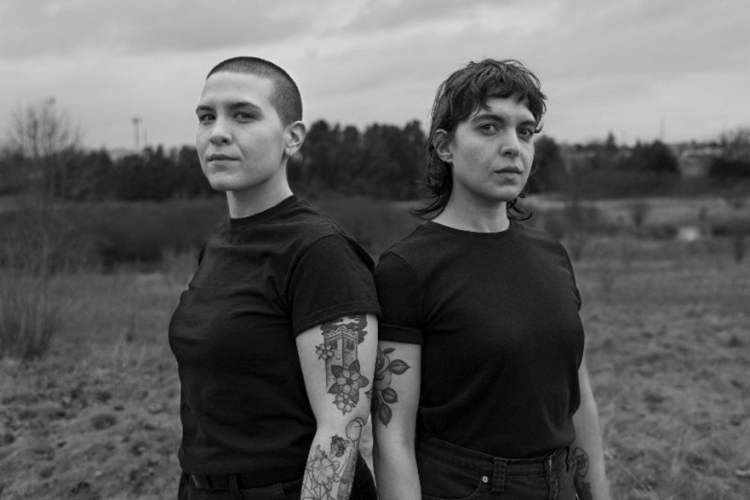 Today Bonnie Trash, the work of Canadian-Italian twin sisters Emmalia and Sarafina Bortolon-Vettor, share the final pre-release single from their debut album, ‘Malocchio’, which is set for release on October 28th via Hand Drawn Dracula.

‘Malocchio’ takes its name from the Italian word for a hex or curse, inspired by folklore and stories handed down to the twins by their Italian grandma, Nonna Maria. Latest single “Silence is a Killer“ sees them embody the malocchio, writing a love letter to its recipient.

Commenting on the track, the band say: “Infatuated with the soul it captures, the malocchio becomes one with you. And you? You eerily love every minute of it. It tricks you into thinking this is now your life, drenched in evil. It will haunt you until the end. How can you break the curse? “Silence Is A Killer” is a lyric video following a Trevisani recipe on how to remove a malocchio, or at least buy some time: boil and burn all the feathers in your pillow, then throw them in the river.”

The accompanying video was directed by Bonnie Trash and shot and edited by Sara May (Falcon Jane).

Sonically, ‘Malocchio’ connects the threads between metal, post-punk, shoegaze and gothic rock, with Emmalia’s guitar work recalling the likes of Black Sabbath, Godspeed! You Black Emperor, Joy Division and My Bloody Valentine. Singer/drummer/lyricist Sarafina’s voice leaps out of the mix with a commanding presence, summoning hints of PJ Harvey or Siouxsie & the Banshees.

Combined with these influences, the duo’s unique approach to their lyrical content really puts them in a school of their own. Inspired by communication theory, social commentary, horror, and ancestral folklore, the sisters approach their songwriting as a conceptual research project into their own family heritage. As second-generation Italian-Canadians, the Bortolon-Vettors became fascinated by the stories told by their Nonna and the connections between Treviso in Northern Italy and their hometown of Guelph, Ontario.

The album begins with the voice of Nonna Maria, their 93-year-old maternal grandmother whose life story inspired the creation of ‘Malocchio’. The crackly recording of an interview with Maria, accompanied by an apocalyptic drone, sets the tone of doom to come. After emigrating to Canada in the late ‘50s and starting a family, Maria must move back to Italy after the death of her father-in-law. Maria’s family is cursed and haunted by the early deaths of those who purportedly received the evil eye long ago. Maria experiences life-threatening omens and supernatural experiences, signifying a need to return to Canada before the curse takes her family.

This chilling work builds on the reputation for thought-provoking horror-rock established with their 2017 debut EP, ‘Ezzelini’s Dead’. That six-song collection was based on the myth of Ezzelino III da Romano, a cruel medieval tyrant from their family’s hometown, San Zenone degli Ezzelini — who was reputedly a cannibal.

‘Malocchio’ was co-produced by the band and Josh Korody (Vallens, Fucked Up, Nailbiter, Breeze, Beliefs) at his studio, Candle Recording in Toronto. COVID slowed down the planned recording schedule, but the additional time gave the duo a chance to strip down the sound to its fundamentals and dig deeper into their “apocalyptic emotional doom” aesthetic, as Korody pegged it. In the fall of 2020, Korody sent three mixes to his label boss, James Mejia, which piqued his interest, and with ‘Malocchio’, Bonnie Trash joins the roster of esteemed Canadian indie label, Hand Drawn Dracula.