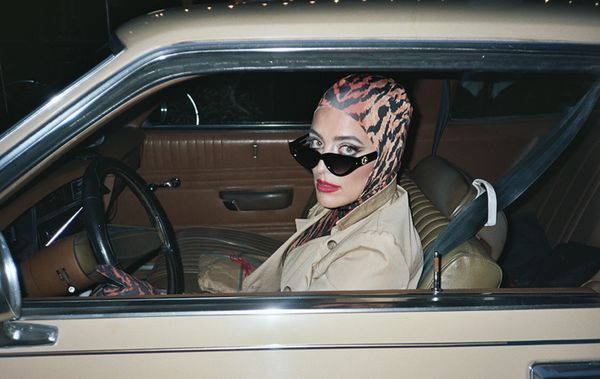 Following ‘Diamond Light’, New York’s Breanna Barbara shares new single ‘Landslide’ – the second track to be taken from new album Nothin’ But Time out 11th November via Fuzz Club. Barbara’s second full-length is a raw and immersive trip through the sounds of psychedelic rock and blues, anchored by her powerful vocals and unforgettable songwriting.

Over the driving beat of ‘Landslide’, Barbara zooms in on the ways that fate affects our daily living, and the complications that come from taking the wheel yourself.

“Landslide is about trusting your intuition and how you can sort of fall off of listening to it at times. I envision when you are in tune with your intuition as sitting at the top of a landslide with the nighttime sky and stars, being close to some sort of God or the truest version of yourself versus when you do fall off from that closeness it can often feel like you’re lost but you can see yourself trying to find your way through and walking away from things that you know aren’t right for you. I think ‘it’ in the song is referring to your fate & what is meant for you.”

On the video, directed by Fatos Marishta, Barbara adds:

“The video was inspired by a dream I had where I was speaking to someone else but when I woke up I quickly realised it was just another version of myself. It got me thinking about how each person in your dreams can be interpreted as different parts of yourself and how mysterious the subconscious & dreamworld really are.

The song also very much evoked visuals of 1970s mystery-spy detective scenes so from there my friend/director Fatos Marishta and I came up with the idea of four subconscious dream characters, all different versions of themselves, running in & around NYC trying to keep, find & perhaps even kill hidden truths about themselves.”

Nothin’ But Time arrives following Breanna’s 2016 debut Mirage Dreams, a trio of critically acclaimed singles, and a number of collaborations with legendary trip-hop vanguard Tricky. As well as joining his US touring band as lead female vocalist, Breanna also did an official rework of his ‘When We Die’ track and featured on the 2021 Lonely Guest album, False Idols.

Whilst readying the new album, 2022 has so far seen Breanna tour the US with Zamrock legends W.I.T.C.H and Night Beats alongside headline tour dates of her own, return to SXSW and play a heap of hometown shows in NYC – including recent dates with the likes of Delicate Steve and King Hannah.

For the recording of Nothin’ But Time, Barbara and her band returned to Nashville’s Bomb Shelter studio with Andrija Tokic (Alabama Shakes, Hurray For The Riff Raff) – with whom she recorded Mirage Dreams.

With musical contributions from Jack Lawrence (The Dead Weather), Tall Juan, Derry DeBorja (Jason Isbell), and Champagne Superchillin’s Ben Trimble and Charles Garmendia, the album was put to tape in the months prior to the COVID-19 pandemic: “I’d learned so much since the last time we were in the studio that I knew I could have a stronger voice getting back into the studio again.”

Nothin’ But Time reflects Barbara’s headlong journey into the world of psychedelic rock and pop, mixing these heady styles with her already established hard-driving blues-rock approach with warped theremin tones as well as celestial vibes courtesy of DeBorja’s own synth wizardry, as Barbara and her band sought out to create mind-expanding music that’s also firmly rooted in the real. “I wanted to make a record that reflected what was going on in the world and outside of myself, while exploring my sound more.”

Nothin’ But Time
Out 11th November via Fuzz Club