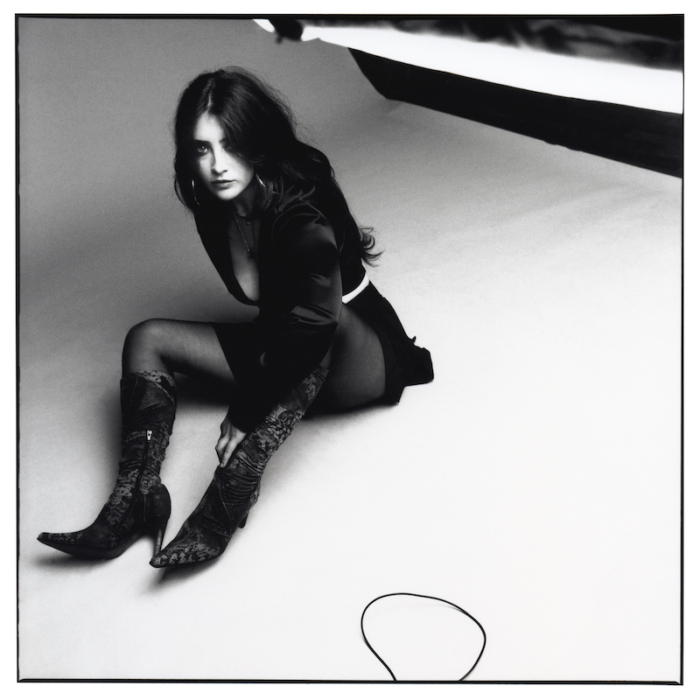 On February 24th Bria will release her follow up EP Cuntry Covers Vol. 2. This six-song EP features the standout covers “Where Have All The Cowboys Gone?” (Paula Cole), “Don’t Come Home A-Drinkin’ (With Lovin’ on Your Mind)” (Loretta Lynn), “When You Know Why You’re Happy” (Mary Margaret O’Hara) and “I Dream A Highway” (Gillian Welch).

“Physical space and environment have greatly informed each iteration of Cuntry Covers” shares Bria Salmena. “With Vol. 1 we had acres of beautiful farmland in summer to explore. With Vol. 2 we had a small apartment in Toronto during the dark winter months that created a kind of claustrophobic creative energy.”

Bria originally heard the lead cover song, “Where Have All The Cowboys Gone?” (Paula Cole) when she was seven on the Women & Songs compilation that was released in 1997. She shares “the song stuck with me – I found Cole’s delivery to be both brooding and chilling. The lyrics all together are confused; discovery, disillusionment, despair. I wanted to make it even more dystopian by turning it into a dreamy dance track. This track became the first song to inspire the “Homage” approach to these covers, embracing the spirit of experimentation. We wanted to stretch this song as far as it would go while honoring the elements of it that make it memorable.”

Watch the video for “Where Have All The Cowboys Gone?” here:

As its name suggested, the intimate and sultry Cuntry Covers Vol. 1 was always going to have a follow-up. Led by the brooding vocals of Bria Salmena, Cuntry Covers Vol. 2 is every bit as potent as its predecessor whose noir-inflected alternative country-rock stood in sharp contrast to the singer’s commanding delivery as leader of post-punk revivalists FRIGS. Debuting the project in 2021, the languid, reverb-drenched Cuntry Covers Vol. 1 saw her artfully collaborating with multi-instrumentalist Duncan Hay Jennings and reimagining a carefully picked collection of Americana anthems.

Created during a break from Salmena and Jennings’ work in Orville Peck’s world-conquering backing band, Vol. 2 was recorded directly after Peck’s second album and Bria’s US tour supporting Wolf Alice. Embracing contrast, the sunny circumstances in which Vol. 1 was made were flipped on their head. Instead of a bucolic barn in the Canadian countryside, they recorded the new tracks in chilly Toronto, huddled together in their tiny makeshift home studio, with Jennings at the controls. “There’s a lot of chaotic energy to it, because it’s us cramped in a space where we’re all also working and living during the dead of winter,” explains Salmena, who also enlisted the help of local Toronto musicians Lucas Savatti (FRIGS), Simone Baril (US Girls, The Highest Order, Darlene Shrugg, Partner), Andrew Manktelow, and frequent collaborator Jaime Rae McCuaig.

The intention behind the songs was different this time around too. While Vol. 1 was Bria’s attempt at subverting country music’s conservative roots and primarily white and heterosexual agenda, here the emphasis was on experimentation. The duo purposely split the two sides of the EP, with the A-side acting as more of an homage to the tracks covered, and the B-sides interpretations taking on a more traditional route with the source material. “We wanted to mess with things,” she says. And while Vol. 2 might be less personal, it’s just as idiosyncratic, with half of the reversions staying truthful to the originals and others taken to a different universe entirely.

The opening trio of tracks triumphs at the latter. A double dose of nostalgia can be found in a pumping, synth-led 1990s dance version of “Where Have All the Cowboys Gone?” originally by US songwriter Paula Cole. Bria’s hypnotic vocals then lead a woozy version of Canadian icon Mary Margaret O’Hara’s jazz ballad “When You Know Why You’re Happy”. “It’s uplifting but there’s also a darkness and somberness to it that really resonated with me,” she says. “I wanted to explore that.” Most innovative of all is their take on Loretta Lynn’s groundbreaking “Don’t Come Home A-Drinkin’ (With Lovin’ On Your Mind)”. Recorded before the iconic artist’s recent death, Bria’s punky version drills into the fiery confidence of the song, which topped the country charts in 1967. About marital rape, it was chosen by Bria because of Lynn’s unapologetic approach to such a highly charged subject matter.

Co-producers Salmena and Jennings are more faithful on the flipside. Nick Cave’s doomy version of “By The Time I Get to Phoenix” – which featured on The Bad Seeds’ 1986 covers album Kicking Against The Pricks – is rendered in fittingly apocalyptic style. “We liked the history of the song and we were attracted to Cave’s dark and brooding version. We felt we could honor that well,” she explains. Gillian Welch’s meditative “I Dream A Highway” is similarly mournful, and “See You Later, I’m Gone”, originally by 1970s folk singer Robert Lester Folsom, sees a moment of hopefulness spring from the gothic gloom that precedes it.

Building on the tried-and-true/bold-and-new duality of Cuntry Covers’ first offering, Vol. 2 delivers a deeper dive into the duo’s brilliant alchemy of traditional and contemporary reinterpretations. But it’s the added experimental flourishes, from dizzying electronica and pulsing bass to sax-driven soul, that takes Bria’s new EP into previously uncharted territory, signalling a thrilling new step in this adventurous artist’s evolution.