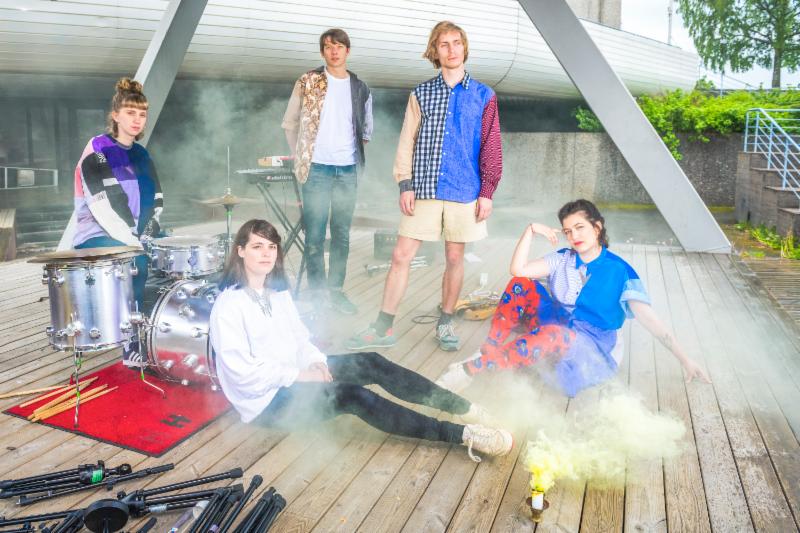 Announce New Album Do You See The Falling Leaves? Due Out 10/18 On Bella Union

Today Norwegian five-piece Broen is pleased to announce news of their forthcoming sophomore LP Do You See the Falling Leaves? that is due for release on October, 18th via Bella Union. Today they have also shared the album’s first single “Lines.” Listen to it HERE.

Broen return with eyes open to new vistas on their second album Do You See The Falling Leaves?. Back in 2017, Norway’s experi-pop quintet brought exuberant reserves of intelligence, positivity and warm-spirited commonality to the world-building bustles of jazz, funk, psychedelia, electronics and hip-hop on their international debut, I <3 Art. Do You See the Falling Leaves? extends its predecessor’s vision and expands its brightly generous worldview, opening the door to mindful, invigorating and mind-bogglingly inventive ways of composing, engaging and connecting with nature, with each other and with their own potential.

As Anja Lauvdal (synths, piano) explains, finding ways to connect is a core theme. Even if EE Cummings’ classic minimalist poem ‘l (a’ was not an influence on the album, its use of a falling leaf to symbolize loneliness clicked with Anja. “I thought that was a nice comment to the title/theme of the record. People can use each other and nature around us to feel connected instead of lonely. The opposite of loneliness is maybe to be connected – as an individual – but also connected to the world. In a way, ‘do you see the falling leaves’ then also means ‘do you see the lonely people’, and that you can open your eyes or reach out a hand.

Broen’s eyes are sharp from opener “Where Is Passion?”, where singer Marianna Røe asks “Where is history… peace… love hiding?” over amniotic ripples of effects and piano. When she breaks the surface to seek out “passion, complexity, duality, singularity” and more, the song leaps to funky, playful, searching life with her. Like sunshine prog-pop on a mindful mission, the radiant title-track seeks to define true engagement – rather than a mere distraction – over fluent backdrops of synths, ever-shifting in tune with its lyrical explorations.

Elsewhere, Broen match meaning to method with a fresh punch and focused purpose. The funk-pop urgency of “Dorian Grays” mirrors its encouragement to live in the now. While “Never Was” lives in its delicately introspective moment, the knottily explosive “Lines” frames an urgent call to embrace possibility.

Certainly, Broen is open to curveballs.“A couple of the songs are pure love songs, which is nice because we didn’t have a big repertoire of those,” Marianna deadpans. Dreamy and dappled, “Bring It Closer” and “Shut Down” harbor beautiful twists on romantic sentiments. Around them, contrasts mount. “Free World” issues stingingly satirical critiques of divisiveness; “Bubbles” mounts an effervescent take on cultural polarization. Finally, “Strings” mirrors its invitation to loosen our tethers in an unmoored saxophone break, floating into space in preparation for – presumably – more new perspectives to come.

To prepare for Do You See…, Broen brainstormed themes. “We wanted it to have a positive message,” Marianna explains, “but some songs ended up more aggressive than positive. That’s because we wanted to explore what it means to be human in this world and in a capitalistic society, and also the historical aspect of it. Why do we keep making the same mistakes? We also wanted to talk about nature. Some songs use images from nature as metaphors but we also wanted to get into our relationship with nature.”

Meanwhile, Røe (vocals), Lauvdal (synths, piano), Heida Karine Johannesdottir (tuba), Hans Hulbækmo (drums) and Lars Ove Stene Fossheim (guitars) dug deep into their collaborative relationships. Although intra-band bonds stretch back to Broen’s time as music students, they stretch themselves anew on Do You See…. The instrumentation is “more naked”, says Lars Ove, than usual. Heida’s tuba is played untreated; Anja plays more piano. Fresh noises include Lars Ove’s synth guitar and guest Signe Emmeluth’s sax. The songs were developed in the studio, flipping Broen’s tendency to explore them live before recording. “Because we have so many great possibilities inside this wonderful band, we try to challenge each other to find other ways of thinking all the time,” Anja explains.

This can sometimes take the form of navigating a “big bowl of influence soup”, says Lars Ove, who name-checks Laurie Anderson, Portishead, Mahmoud Ahmed, Neil Young, Mariah Carey, TLC and more. Marianna adds Destiny’s Child and Joy Division to the broth. Mostly, though, Broen deal in distinction. Anja references a Village Voice essay in which US writer Jessica Hopper praises the – predominantly – female-driven best albums of 2018 for transporting listeners to “discrete new worlds”.These albums, Hopper argues, recognize raw realities but also imagine a life “beyond chaos, strife, and dysfunction”. Likewise, Do You See…rises above mere genre-juggling in its self-contained, forward-thinking intent. “I never think of our music as a ‘mix of things’,” says Anja. “It’s more its own world.”

But all bets will be off live, where Broen revel in reinvention. Anja recalls a recent trio of shows played “for fun” at Khartoum, a small bar in Oslo, where they found new, playful, thoughtful ways to navigate their songs. “I think we’re going to do more of that – try to find spaces that make us feel like stuff can happen. For us, music has to be able to move.” A snapshot of a fluent band in motion, Do You See the Falling Leaves? is a glorious spur to Broen’s ongoing explorations.

Do You See The Falling Leaves? track listing:

2. Do You See The Falling Leaves?

Pre-order Do You See The Falling Leaves? HERE