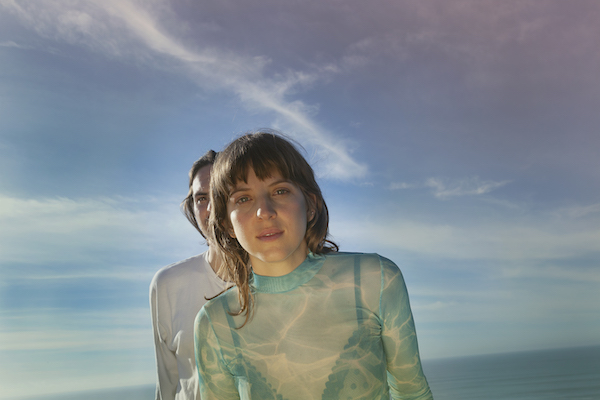 Today Mexican/German duo Camila Fuchs have shared a new single and accompanying video from their forthcoming album ‘Kids Talk Sun,‘ which will be released on November 13 via Felte Records.

Recorded with Spacemen 3/Sonic Boom’s Peter Kember in the misty, castle-peaked hills of Sintra, just outside Lisbon in Portugal, the duo’s third album sees their experimental electronic pop imbued with a youthful sense of light and wonder. Amidst nine tracks of off-kilter, vibrant atmospherics, they give an abstract meditation on childhood, the exchanges between humans, nature, and within nature itself.

Following the radiant first single “Sun“, today the band share an intoxicating dose of electronic psychedelia, “Moon’s Mountain“. They describe the track as “the song that holds memories from creating ‘Kids Talk Sun’. It’s the song that references moments and places during this time: experiencing psychedelics, encountering days with odd coloured skies, the moon drawing the mountain we see from afar, the non-need of being careful, Pete coming by and dropping off plants at our doorstep morning after morning, sitting and waiting for the music making to start, the love that spread from day to day.”

The accompanying self-directed video embodies those feelings. They explain: “The video is a collage of all these moments we spent together, of all the strange things we liked which caught our eye, all the different parts creating the root system on which this album stands. It’s the photo album, it’s the condensed diary, it’s the song that encapsulates that time.”

On ‘Kids Talk Sun’ they have managed to harness a transformational space of exploration and experimentation.  The album was recorded near the sea and wilderness just outside Lisbon, with the band shifting back and forth from the natural world to the studio.

The result is an ecosystem of complex, ever-evolving sounds working together, with generosity given to the process itself; the biomimicry of plants, insects, the sun and moon, earth, seasons, and cycles gorgeously reimagined in sonic form. There is a sense of multiplicity, a reassurance on change deeply rooted in transformation, on things disintegrating, decomposing, and something new coming to ground us, arms open, and ready for hope.

‘Kids Talk Sun’ will be released on November 13th via Felte. Pre-order links can be found here: https://ffm.to/camilafuchs