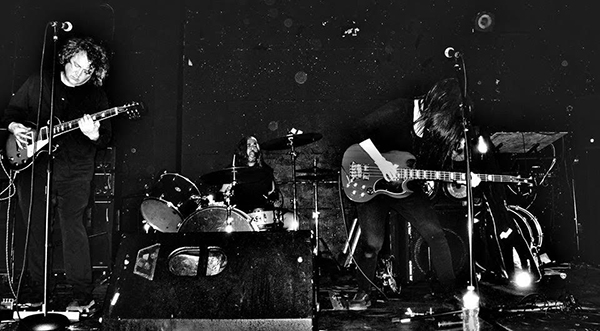 CARDINAL WYRM is embodied by lead vocalist/drummer Pranjal Tiwari (S.C.R.A.M.), bassist/vocalist Leila Abdul-Rauf (Vastum, Terebellum, Hammers Of Misfortune, Fyrhtu), and guitarist/vocalist Nathan A. Verrill (Terebellum, Fyrhtu). The follow-up to their Cast Away Souls album, released via Svart Records in 2016, Devotionals can be described as heavy, intricate, driving, progressive, and genre-bending music that seeks to tell a story.

“‘Canticle’ tells the age-old story of meeting the devil at the crossroads and being offered all the glory of the world… at a price,” Pranjal Tiwari states. “In this case the story is told from the point of view of the devil making the desperate traveler an offer. True to the song’s themes of fool’s gold and false promises, the music initially seems shining and triumphant, but there’s an uncomfortable, unsettling undercurrent to it, especially when Leila’s primordially savage growling vocals come in. There’s then a strangely restless, nightmarish middle section with mournful guitar and bass lines from Nathan and Leila, where we catch a glimpse into the abyss, the misery that’s etched on the other side of the coin. After this, we’re asked to make our choice… the ordeals of hell or the oblivion of living a quiet life and being forgotten. Which way would you go?”

With the song’s premiere, The Sleeping Shaman writes, “Although rooted in the more traditional sense of doom metal, CARDINAL WYRM take this concept, and push those boundaries, exploring the paths of noise-rock, deathrock and sludge.”

CARDINAL WYRM will self-release Devotionals on cassette and across all digital service providers on December 11th. Find preorders where “Nightmarchers” is streaming HERE and watch for a vinyl edition to drop early next year.