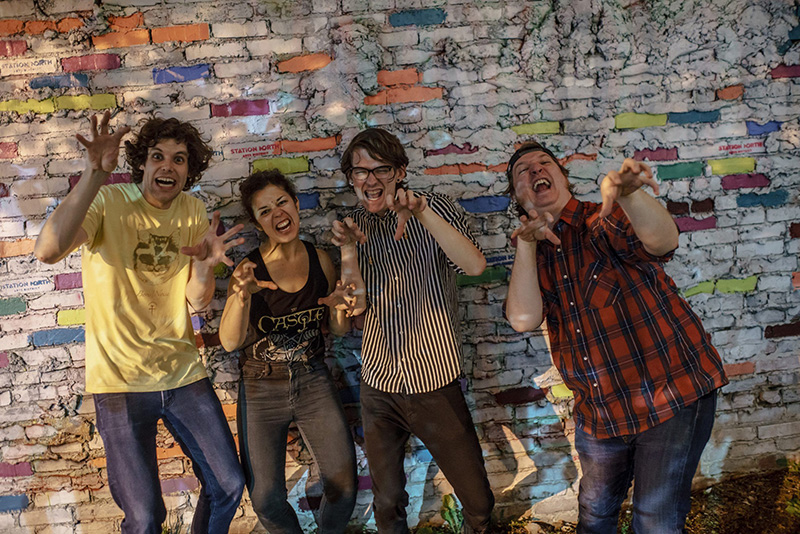 Trying to pigeonhole CAUSTIC CASANOVA musically is bound to fail, but one certainty is that the American stoner/punk/sludge/noise/riff-rockers (take your pick) are heavily invested into the avian super-flyers that graced the artwork of their last album; not to mention being keen on sharp societal commentary. All of this is evident in the band’s new animated video, stunningly created by Jase Harper, which also features a giant space squid and a banana cow. Best not to spoil too much and just let you see for yourself.

‘Memory King‘ is taken from CAUSTIC CASANOVA‘s 2019 album “God How I Envy the Deaf”. Please see below for details.

“Jase Harper, with whom we’ve collaborated for well over a decade, and I worked on the concept and story for this video for months and months, before his work schedule and the pandemic nearly put an end to the whole project”, states singer and bass player Francis Beringer.

“We pressed on, thankfully, and Jase’s tireless work finally paid off. We now present the complete, beautiful, insane music video for “Memory King”, off our 2019 album God How I Envy The Deaf. Within the dystopian bird universe depicted in that album’s art, the story revolves around a pigeon drummer who has her livelihood taken away because she will not agree to produce only government approved music.

She signs up for an extremely dangerous space mission, one of the few available jobs for former artists who refuse to comply with the regime’s orders. In her cosmic journey, within her own mind and out in deep space, she encounters characters from throughout the Caustic Casanova artistic universe, including the legendary space squid and the banana cow. As for the thrilling conclusion of self-sacrifice, well, you’ll just have to watch the video.”

Jase Harper adds: “After over ten years producing countless gig posters, t-shirts, EP and LP covers as well as a heap of merch, it seemed about time to add a film clip to my ever-growing Caustic Casanova portfolio”, tells the band’s ‘resident’ artist and video creator.

“When Francis first asked if I’d be interested, I knew I wanted to create something for the track ‘Memory King’ off their latest album ‘God How I Envy the Deaf’. A slow burning but epic piece that would fit perfectly into the Birdtopia world building that we created for the album art. At 5′ 45″ this was no mean feat for a one-person animation team and after several setbacks, I’m pleased it’s now getting its wings and being launched into the cosmic unknown.”

CAUSTIC CASANOVA is a riff-rock outfit whose frenetic, heavy-on-experimentation aesthetic makes bands like THE MELVINS and SONIC YOUTH the most logical comparisons. The acclaimed 2019 MER album “God How I Envy the Deaf” won two “Wammies”, the Washington D.C. area equivalent to the Grammys (but with better taste) for “Best Hard Rock Album” and “Best Hard Rock” Song.

Under normal circumstances, these road dogs would have been touring their butts off in support of that album. They very much intend to get back in front of audiences again in 2022 to support their next record. In the meantime, CAUSTIC CASANOVA delivered a memorable cover of ‘Wicked World’ as their remarkable contribution to the tribute compilation “Best of Black Sabbath [Redux]”.

The band has already been announced to appear on the forthcoming “Best of AC/DC [Redux]” album as well.

Available formats
“God How I Envy the Deaf” is available as Digipak CD and LP on yellow vinyl.