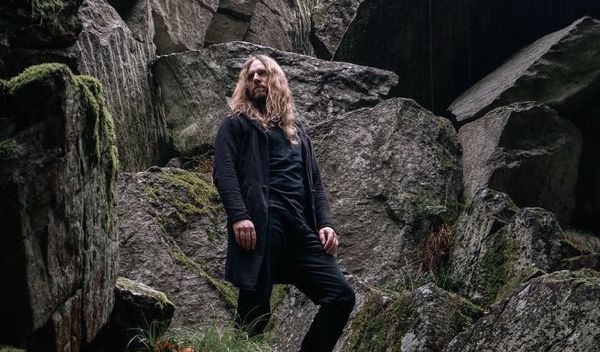 CAVERNOUS GATE has released the sinister lyric video ‘The Artefact’ taken from the forthcoming debut full-length “Voices from a Fathomless Realm”, which has been slated for release on October 14.

The tell-tale video ‘The Artefact’, which is inspired by the band name, is now available for immediate publication:

“The song’s atmosphere and arrangement kind of created a basic musical storyline, which I continued to build on. ‘The Artefact’ is probably the stylistically most consistent track on the album and it shows clear influences from both early thrash and death metal.”

“Voices from a Fathomless Realm” is the first full-length from CAVERNOUS GATE. The German death doom outfit is a solo-project of multi-instrumentalist Sebastian “S.K.” Körkemeier. Sebastian has co-founded HELRUNAR under the alias Alsvartr and he also supports Markus “Schwadorf” Stock’s black metal project SUN OF THE SLEEPLESS as well as EMPYRIUM live.

CAVERNOUS GATE and “Voices from a Fathomless Realm” are quite obviously musical works of love. Sebastian is successfully channelling his penchant for British doom and death acts such as earliest PARADISE LOST and CATHEDRAL as well as Swedish death metal in the vein of early ENTOMBED and DISMEMBER into a dark, depressive, and massive monolith of ultra-heaviness.

On “Voices from a Fathomless Realm”, Sebastian’s granite-grinding and abysmally low growls clearly dominate, but are on rare occasions beautifully contrasted with Jenny Kalbitz’ female voice.

Lyrically “Voices from a Fathomless Realm” explores a grimdark fantasy world of twilight and its ghostly inhabitants, which Sebastian evokes in ways similar to the descriptions of paintings and by the creation of vivid dreamlike images.

What Sebastian started on the 2019 split-album “Sun of the Sleepless / Cavernous Gate Split”, he has now honed to perfection with the project’s first full-length “Voices from a Fathomless Realm”. Crafted with all the experience of a veteran metal musician, but also emotionally captivating, the added deep and clearly audible love for the dark heavy style makes the difference.

Let CAVERNOUS GATE drag you into a nightmare abyss of classical doom death interpreted in a contemporary way that paints musical pictures of an unexpected beauty lurking in these unexplored depths of pain and utter sadness.

Available formats
“Voices from a Fathomless Realm” is available as a Gatefold 2-LP on black vinyl and on hyacinth blue vinyl, and as Digipak CD.