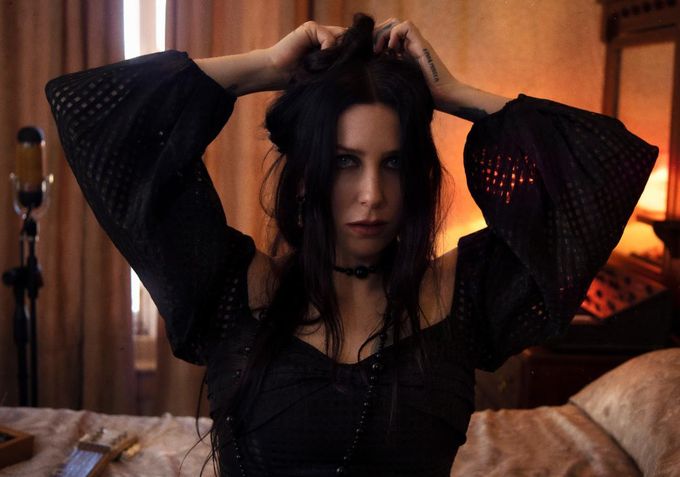 CHELSEA WOLFE – BIRTH OF VIOLENCE
OUT TODAY VIA SARGENT HOUSE

NORTH AMERICAN TOUR KICKS OFF NEXT MONTH
Praise For Birth Of Violence:

“Birth Of Violence…is an awakening. It’s a deliberate turning point for the musician, as Birth of Violence provides a gentle rupture from a wildly careening, in-between self. It’s Wolfe’s attempt to reroot herself; to become something full and healthy.” – The FADER (Read Feature)

“An album full of earthly and ethereal wonder. Wolfe strays away from the metal elements found in past works, embracing her interest in folk and rock. The music carries the listener throughout each track, making for a meditative experience.” – Consequence of Sound

“Sounding like she’s been sequestered on a mountain top with nothing but books on witchcraft and a handful of Joni Mitchell records (reflecting her actual retreat into the woods to work on new material), the singer/songwriter flexes her emotional and musical growth on this gorgeous, introspective cut.” – Revolver

“offers rewards for those who listen more closely, who engage with its intimately affecting material. ‘Birth of Violence’ is some of Chelsea Wolfe’s gentlest material, but dig deeper, listen a little closer, and you’ll find some of her heaviest.” – Treble

“Ominous…this only goes to prove that Wolfe is still very much evolving as an artist and nailing it every step of the way.” – Metal Injection

“While the music technically errs on the acoustic side, there’s nothing soft about Wolfe’s terrible and awe-inspiring invocation.” – A.V. Club

“…a detour from the more haunting atmospheres Chelsea Wolfe typically channels, embracing a cold minimalist approach that layers on the intensity as it unfolds.” – Loudwire

“Though it’s been years since Wolfe last delved this deeply into folk sounds, Birth of Violence moves unmistakably forward… Chelsea Wolfe’s creative versatility is on full and fearless display here once more, her music both invigorating and intoxicating on ‘Birth of Violence’.” – PopMatters

“The result is an album that sounds like a cry of pain and a protest against American cultural shifts, the brutality of the human being and patriarchal society.” – New Noise Magazine

Chelsea Wolfe has always been a conduit for a powerful energy, and while she has demonstrated a capacity to channel that somber beauty into a variety of forms, her gift as a songwriter is never more apparent than when she strips her songs down to a few key elements. As a result, her solemn majesty and ominous elegance are more potent than ever on her new album, Birth of Violence which sees its release today via Sargent House.

Birth of Violence is a return to the reclusive nature of her earlier recordings where we see her withdraw into her own world of enigmatic and elusive autobiography. But the album also exists in the present; she examines navigating the world as a woman and addresses modern tragedies such as school shootings and the poisoning of the planet.

Wolfe will be embarking on a major North American tour this fall, stripping back the live show to perform new and old songs in a more intimate light. All dates are listed below.