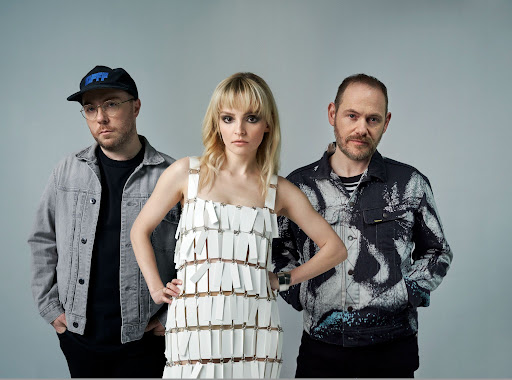 THEIR NEW ALBUM SCREEN VIOLENCE IS OUT NOW ON GLASSNOTE

Fresh from the ubiquitous critical acclaim of their fourth album Screen Violence (“Their best album to date” The Independent), CHVRCHES follow-up with their cover of Gerard McMann’s cult-classic “Cry Little Sister,” taken from Netflix’s Nightbooks. Originally made famous as the theme music from 1987’s The Lost Boys, CHVRCHES add synth textures & ethereal vocals to create a hauntingly beautiful rendition of a timeless classic. The song will be featured on the film’s soundtrack, which also includes the score from Michael Abels (Get Out, Us). Listen to “Cry Little Sister” HERE.

On working on the cover, the band shares:

“We were so excited to work on this project as we are big fans of everyone involved. Cinema — horror in particular — has always been a big part of CHVRCHES behind the scenes. We have talked about covering Cry Little Sister for years and this seemed like the perfect moment to do it.”

To experience 2020 was to experience something of screen violence. It was to struggle to make the people you loved feel more real than the characters on TV shows, and to experience a world of trauma and tumult as if it was another TV show. 2021, however, marks a decade together for Iain Cook, Martin Doherty, and Lauren Mayberry – a decade whose sound they have helped to create and define.

In their new album Screen Violence – originally conceived as a name for the band, but revived for the album ten years later and during a pandemic when the reality of screen violence has never been more pertinent – they narrate the theme of screen violence in three main forms: on screen, by screens and through screens, touching on feelings of loneliness, disillusionment, fear, heartbreak and regret, and describing both the days of the Video Nasty and the power the screens all around us wield today.

Perhaps ironically, or not ironic at all, the album was recorded almost entirely remotely between Los Angeles and Glasgow where they self-produced and mixed the album via video calls and audio sharing programs to create something that is unique and special, but inherently CHVRCHES.

Screen Violence features singles “California,” “He Said She Said,” “How Not To Drown” featuring one of the band’s musical heroes The Cure’s Robert Smith, and “Good Girls” which was recently remixed by the iconic film director and legendary actor, screenwriter and composer John Carpenter.

The official accompanying videos for these singles formed a lo-fi, nostalgic, and analogue-inspired trilogy directed by multi-disciplinary artist Scott Kiernan.

CHVRCHES will embark on an extensive North American tour beginning this November. Tickets are on sale now, visit www.chvrch.es for more information.