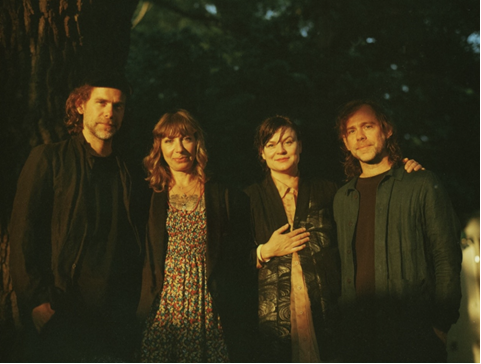 Bella Union are thrilled to introduce Complete Mountain Almanac whose self-titled album will be released January 27th via the label. Complete Mountain Almanac is the musical collaboration of Norwegian-born, Sweden-based singer and composer Rebekka Karijord and American-born, Italy-based poet, dancer and multimedia artist Jessica Dessner, joined by her brothers Aaron and Bryce Dessner of The National.

To accompany the announcement Complete Mountain Almanac have shared a beautifully shot video for the beguiling lead track “May” directed by Olof Grind. Layered guitars fit perfectly within the track’s folky, chamber pop instrumentation, beautifully expressing its themes of hope and rebirth. Rebekka’s voice weaves Jessica’s words around the music with care. “The greatest mysteries are not material,” she sings as the track’s main focus becomes clear: whether big picture or deeply intimate, our human experience – and the ways we heal and nurture this precious life – help us make sense of everything here on offer. Listen / watch HERE.

Rebekka Karijord and Jessica Dessner met by chance in Brooklyn in the late ‘00s. Immediately taking an immense liking to one another, their friendship and shared artistry has produced one of the most important projects of both of their careers, now 15 years on. This meeting resulted in the creation of Complete Mountain Almanac, an artistic and musical project combining Rebekka’s expert songwriting and Jessica’s poetic and lyrical prowess. Complete Mountain Almanac first took seed in Rebekka’s mind: to compose an album about climate change in 12 suites, representing the 12 months of the year and the inherent healing cycle of nature. As she entered the initial writing stage, she approached Jessica to create the visual component of the project. Soon after, Jessica was diagnosed with breast cancer, and her own creative practice began to fuel her own internal healing process. In addition to working on the project’s artwork, she wrote a book of poetry, entitled Complete Mountain Almanac. Once these words were in Rebekka’s hands, they soon found their home as the lyrical matter for the songs – as well as baptizing the women’s collaboration, and debut release, with its name. The experience of personal illness and healing, alongside the experience of addressing climate change and the potency of nature, found an existential common ground in the two women’s collaboration. And Complete Mountain Almanac stands as testimony to their raw uncovering – an ode to rejuvenation, joy, and hope.

The album features performances and co-production from Jessica’s twin brothers, Aaron and Bryce Dessner of The National. The four artists united in Paris’ St. Germain studios to work on transforming Rebekka’s demos into a fully-fledged album. In order to preserve the urgency and soul of the material, all the tracks were recorded live, just Rebekka’s voice intricately laced through Aaron and Bryce’s expert guitar playing. As co-producer Rebekka then added minimalistic textures including horns and synthesizers, whilst Bryce wrote string arrangements for six songs that were performed by the Malmö Symphony Orchestra.

As the record cycles through the seasons, the seamless correlation between reckoning with the state of the planet in the wake of the climate crisis, and the healing of one’s body becomes abundantly clear. Sonically, the album cycles through folk, classical, chamber music and everything in between, creating a cocoon-like atmosphere that draws the listener into a stand-alone universe. It’s a marriage of the inner and outer worlds, illness and rejuvenation, grief and joy.