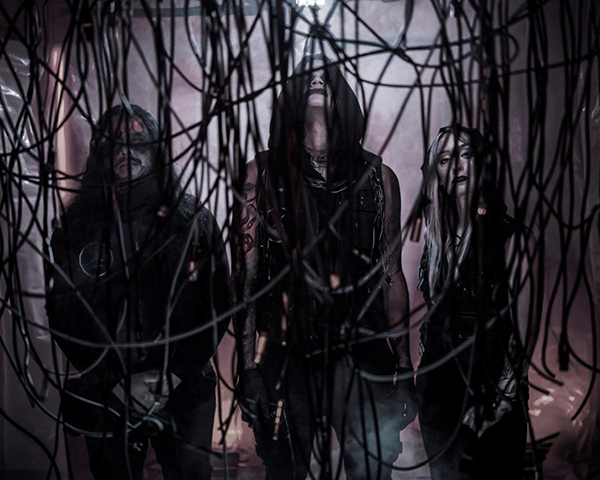 “‘Follow’ is the product of a long weekend spent in a cold Philadelphian garage with producer Arthur Rizk,” shares CONTRACULT Collective vocalist/producer Svart. “This collaboration delivered two cuts of raw industrial metal which we felt would follow up nicely from our previous release, ‘A Cult of Opposition.’

“The title track ‘Follow’ is a self-reflection on giving space and energy to unsafe forces which drain every drop of blood from your body. Learning to establish healthy boundaries and self-preservation is a constant struggle I have bouts with every day. It can bleed me till I’m blue. It’s like salt in my wounds. We hope you f*cking freaks enjoy it, follow if you dare.”

“‘Follow’ is a juxtaposition between primitive hard beats and lush orchestrations of entangled cold guitars and synth,” says Rizk. “I loved working on it with Contracult Collective who were all about keeping everything big and harsh!”

CONTRACULT Collective will take part in Chicago’s Cold Waves Festival virtual Halloween event “Season of The Glitch” tonight, October 30, performing live at 11:30 P.M. ET (8:30 P.M. PT). The festival will be streaming for FREE via Twitch at this link: http://www.twitch.tv/coldwaves2020.  The band were also recently announced as part of the lineup for the annual Aftershock 2020 Festival set to take place October 7 – 10 in Sacramento, CA with headliners Metallica and My Chemical Romance.