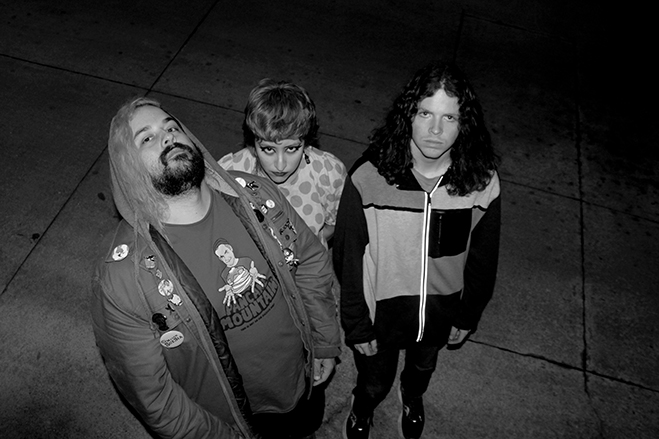 LAUGH OF A LIFETIME

Los Angeles, CA (January 24, 2023) – Hailing from Long Beach, CA, the alternative rock trio Cosmic Kitten demand to be heard. Laugh of a Lifetime, their ferocious and biting forthcoming album, is set to be self-released on May 5, 2023 and today, they’re thrilled to share the record’s second single, “All The World,” and its accompanying music video, directed by Scott Stuckey (Pancake Mountain).

The song follows on the heels of the LP’s lead single, “Some Fascination.” Laugh of a Lifetime was recorded by Pedro Mancillas, Steve Moriarty (The Gits) and mastered by Jack Endino (Nirvana).

Speaking on the song, the band stated: “‘All the World’ is about our 2020 lockdown experience and the feelings of isolation it gave us and so many others. The song speaks of being trapped inside while making bigger plans to expand your world and seek your dreams at a time that is most shut down. We also expressed in the song the hardships of insecurity and self doubt bred by the extended moments of inactivity.”

WATCH “ALL THE WORLD” VIDEO HERE

The three-piece Long Beach post-grunge, punk, alternative-rock band Cosmic Kitten formed in 2016 are like a time capsule to the era of 90’s grunge. Karen Marie on guitar and vocals writes deep, thoughtful melodies and poignant meaningful lyrics. Whom in this role fluctuates from timid, shy vocalist to gritty, explosive screamer, taking you on an auditory journey through emotions and stories backed by a bright, fuzzy guitar.

Zach Huckabee beats away at the drums with passion and aggression adding groove and drive, and with Jay Vesper on bass gliding across the fretboard with agility and precision. The band has always put a focus on charging the audience with energy as well as allowing them a safe space to think, feel and express themselves as the individuals that they are.

They have released three full length albums, along with three cover albums in line with their musical influences ranging everywhere from Nirvana, The Melvins, PJ Harvey, Soundgarden and Alice in Chains to punk classics like Bikini Kill, The Wipers, The Gun Club and Joy Division.

The release of their first album, Be Nice to Strangers, was supported and praised among the local LA scene for its heavy-hitting yet meaningful hooks and lyrics. It wasn’t until their second release in 2018, Lobotomy, that motivated them to venture on their first West Coast tour, followed by other tours around the U.S. As they moved into 2020 with their third album You Gotta Understand, recorded by engineer Ulysses Noriega (The Offspring), the COVID-19 pandemic set their next tour on hold until September 2021.

Cosmic Kitten continues to make a splash in the L.A. and O.C. scene at its most well-known venues, opening for legends like Mike Watt and The Avengers, among others.

The band is gearing up for both a UK and US tour in anticipation of the release of Laugh of a Lifetime. Their trek across the western states begins May 3, 2023 in Los Angeles at Redwood Bar before hitting Berkeley, Portland, Seattle, Salt Lake City and others and ultimately culminating in a hometown show in Long Beach on May 14th. Full list of dates below. Tickets can be purchased HERE. 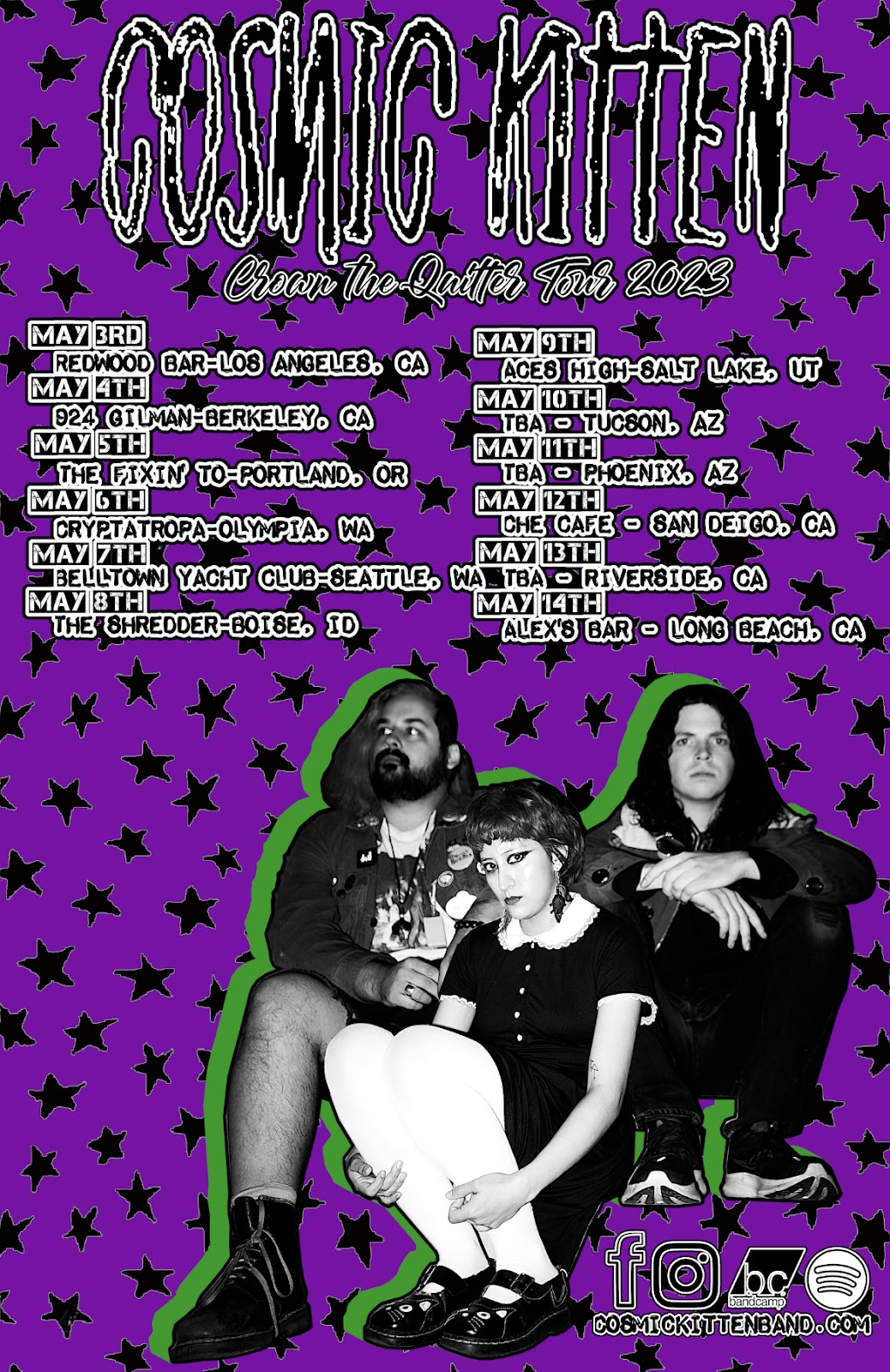 Laugh of a Lifetime Track Listing:

Laugh of a Lifetime is Cosmic Kitten’s fourth self-released full-length LP. The record explores the ideas of finding mental wellness while navigating through the world as a gender fluid, non-binary person of color dealing with past traumas in the face of a challenging post pandemic society. Having most songs being written on an acoustic guitar during work breaks at singer/guitar player Karen Marie’s day job at the peak of pandemia.

Cosmic Kitten started work on Laugh of a Lifetime in July 2021 at the basement studio of obscure but legendary 90s band The Gits’ drummer Steve Moriarty in Oakland, CA after he had heard their previous work on a cover of Gits song “Cut My Skin” online and reached out to vocalist Karen Marie showing interest in working with the band on new music.

After iterations and edits of the Oakland recordings, additional tracking had to be done in July 2022 at Ryan Doria of the band Pressure Cracks’ studio, Nightmare Sound Studio, in Garden Grove, CA. With help of Pedro Mancillas, Cosmic Kitten gave the record its final heavy hitting yet atmospheric sound.

Shortly after, they reached out to underground music legend Jack Endino (Nirvana) with little hopes of possible collaboration. Quickly thereafter in spite of doubts, they received confirmation of interest from Endino and the mastering was underway.

The album cover is set at the Historic Harris House in Burbank, CA depicting a hostage taken prisoner by a cult of nondescript yet dangerous masked characters who are featured in the accompanying music video for the LP. The cover matches the tone of wrestling with darkness that feels encumbering and sometimes even arresting on your ability to live life freely and in enjoyment of the people and moments that surround you.

This emotional core is reflected in the more in-depth lyrical content of the record and in the ebbs and flows of its musicality.