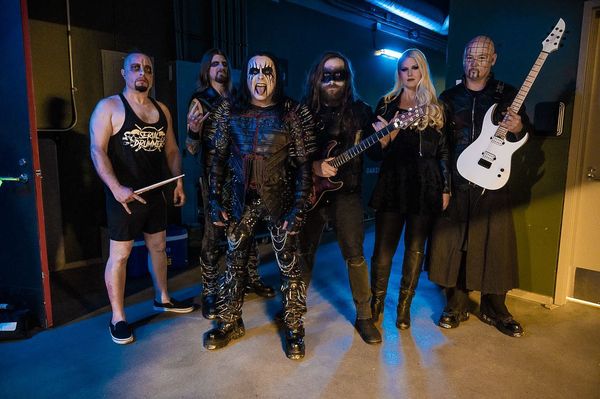 CRADLE OF FILTH: US coheadline tour

Tickets On Sale this Friday, the 13th!

The first leg of the “Double Trouble Live” tour will visit several popular western and southern U.S. markets, coming to an end in Albuquerque, NM on March 26. Support will come from Black Satellite and Oni.

Tickets go on sale this Friday the 13th at 10:00 AM local time. Check local venues and artist homepages for tickets and more information.

Get your tickets now before it’s too late! The second leg is planned for later this year, so stay tuned to learn when this killer bill will be headed to your town.

“Cradle Of Filth are maniacally looking forward to this two-pronged headline assault with fellow noisemongers DevilDriver. Frontman Dez has been a friend for years and a brilliant manager to boot, and to head out on the road for what promises to be the first leg of the ‘Double Trouble Live’ world tour with him and the band was an opportunity far too good to pass on.

“We are chomping at the bit to get out on the west coast again after our very successful run supporting Danzig last summer, and this eclectic tour package is so heavy it’s literally going to GRIND faces to a pulp. Which, in this line of work, is a good thing!

“So, see you guys (and ghouls) out on the road for what promises to be twelve devastating nights of musical mayhem and debauch! Definitely a killer tour not to be missed!”

“I have been a fan of Cradle of Filth since the early 90s, and over the years I’ve not only had the opportunity to become great friends with Dani and the band, whom are all wonderful people, but also to manage their career alongside my wife Anahstasia, who is CEO at Oracle Management.

“When presented the opportunity to go out on what is DevilDriver‘s first shows in almost three years and co-headline with the mighty Cradle Of Filth on this first run of what is now a world tour, it could not be passed on!

“I’m looking forward to not only crushing stages with DevilDriver, but also watching Cradle of Filth nightly on the side of the stage.

Get the fuck ready – this tour will be the one not to miss this year and tickets will go quickly! Get the fuck in the pit – this one will be vicious!”

Positioned firmly at the top of the extreme black metal genre, CRADLE OF FILTH reign supreme as one of the most revered, formative and notorious names in the scene, and are undeniably responsible for breaking ground for many of today’s top metal artists with their trademark mixture of grim blackened heaviness, macabre theatricality and scintillating gothic style. The rule of Filth began in 1991, followed by the unleashing of 1994’s ‘The Principle Of Evil Made Flesh’ – humble beginnings that expanded into cinematic classics like ‘Cruelty And The Beast’ and ‘Midian’.

The band’s unyielding international touring schedule has garnered them a massive following both in the cult underground and at the top of the mainstream, defying trends while staying true to their roots. More recent offerings such as 2015’s ‘Hammer Of The Witches’ and 2017’s ‘Cryptoriana – The Seductiveness Of Decay’ continued to bolster the unremitting legacy of Filth, until the band, along with the rest of the universe, was abruptly halted by the global pandemic in 2020.

But, as is evident by the staggering response from their devoted legion of followers, that time was put to good use, spurring the emergence of the band’s latest, breathtakingly heavy offering, 2021’s ‘Existence Is Futile’. The album debuted at #20 on the Billboard 200 with Hard Rock Genre, on the Hard Music Albums charts at #4 in the US and #5 in Canada, #9 on the German Album charts, #3 and #5 on the UK Rock & Metal Albums chart and UK Independent Albums chart respectively, #4 on the Finnish Albums chart and many more, proving that CRADLE OF FILTH continue to own the dark.