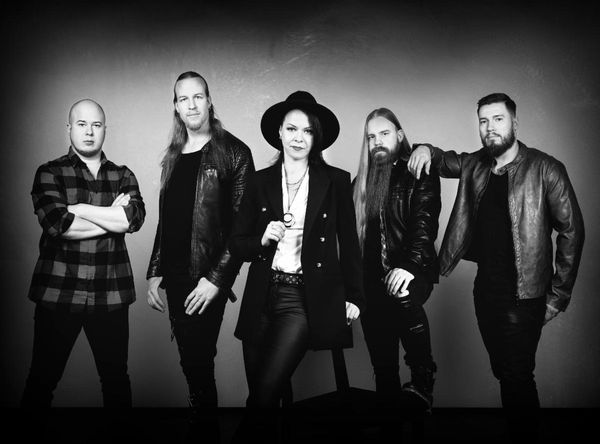 The lads and lass of CRIMSON SUN have returned from a two-year hiatus with the first single from their upcoming album. The Finnish five-piece has signed a worldwide deal with Gramophone Records, and are wasting no time releasing a new track! Fans can check out “Feed The Fire”, along with an accompanying music video here.

“Feed The Fire” showcases once again the band’s unique brand of modern melodic metal, delivering a catchy chorus and high-energy, contemporary instrumentation that will resonate with a wide range of fans.

“As soon as we saw the script for the music video, the whole band was blown away – this was gonna be something really different and surprising from us! And what could’ve been a more appropriate place than a mental hospital to fight one’s own demons, which conveys the message of the lyrics.

The former Kellokoski Mental Hospital was chosen as the shooting location for the storytelling parts. I bet no one would’ve expected that our next music video would play out just like a scene from a horror movie!”

“We wanted lyrics with a positive vibe and a catchy chorus for Joni’s energetic composition, and I feel like we totally nailed it. The thought behind Feed the Fire’s story is someone who rises to the stage and conquers their fears and insecurities. Even though the protagonist already has the audience on their side, they still need to take that decisive step into the unknown and feed their inner fire.”

The new, yet to be announced album from Crimson Sun will be released later this year via Gramophone Records. Stay tuned for more updates!

Hailing from Kotka in Southern Finland, Crimson Sun has been a critical favorite pick in polls about the next big metal phenomena for years now.

They are no strangers to big stages, opening for names like Epica, Poisonblack, and Omnium Gatherum, and performing on essentially every major metal festival in their home country, while also making precision strikes to prominent music clubs across Europe.

In 2015, Crimson Sun’s breakthrough album ‘Towards the Light’ received excellent reviews in the media internationally, and was recognized as the debut album of the year by multiple metal outlets.

This success was followed up by their sophomore album ‘Fates’, which was released in January 2020 and was met with an excited welcome and bookings at a number of festivals. While history found its way to disrupt those events, the band used the opportunity to push forward instead, ultimately writing their strongest and most diverse material to date.

The fruit of the lockdown’s creative influence, star-studded with a collaboration alongside a Danish dream team – singer-producer Christopher Stjerne, and Grammy Award-nominated, producer and mixing engineer Jacob Hansen – will be released in the latter half of 2022.