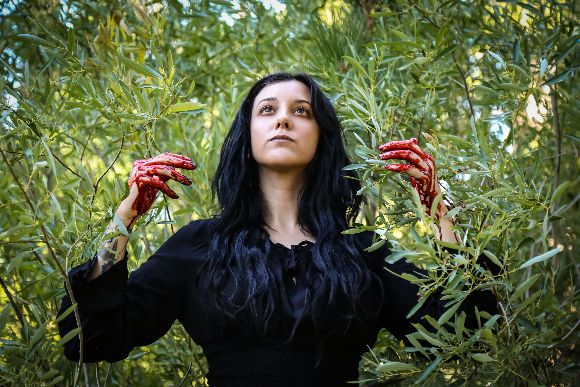 In addition to the album release, CrowJane is also premiering her brand new video for “The Pharmacy” today, September 16, 2020 viaAudiofemme. “Part of the reason why I chose ‘The Pharmacy’ to be a single is because I had this idea come into my mind for a music video. I didn’t want to portray pharmaceuticals in a literal sense. Instead, I wanted to portray the act of trying to heal someone’s ‘demons’ through mysticism. Some of my favorite subject matters are the occult, voodoo, and demons,” says CrowJane of the creeptastic and sinister video. “I liked it just being a montage of sorts of this imagery that informs the viewer but still leaves them guessing. It was fun to shoot this with my friends and to put demon makeup and goop on myself.”

“I’m amazed that Mater Dolorosa is finally coming out to the public and in this way with publicity and a record label. If you would’ve told me that when I was writing, it I wouldn’t have believed you,” says CrowJane about the album release. “My personal journals/therapy session solo album is being exposed for others to listen to and digest, and I’m just itching to write more. I honestly couldn’t think of a better time to pour out thoughts and emotions onto paper and into songs than right now with the state of this country and in my jobless quarantine.”

Mixing contemporary production with a real DIY aesthetic, CrowJane and Roessler together explored sound textures and other effects to create the captivating soundscapes that envelop her uniquely haunting vocals. “Mater Dolorosa was an experimental adventure of messing with different sounds and homemade instruments,” she explains of the unconventional instrumentation that included tin cans, bed railings and even cat litter. “I used foil and hit it with a pencil as a ‘snare’ sound on ‘Circular Valley,’ for instance. I’m happy with the way it turned out and I think it is a good first album and it won’t be the last.”

One by one, using fresh alchemy invented on the cuff, they opened old wounds and from them extracted Mater Dolorosa’s ten eerie pearls. The path they carved together led through a twisted maze, the obstacles so frequently daunting that the project took years. During that time, CrowJane helped bring her previous projects Egrets on Ergot, “Sally” and “Nurse Heather” in the twisted cabaret of The Deadbeats and, most recently, the unhinged front woman of quizzical LA sonic terrorists, Prissy Whip, whose Swallow LP Roessler also recorded and mixed to local acclaim in Los Angeles.

Coming from a visual art background of surrealism and horror, CrowJane (real name Heather Galipo) has built a career as a professional effects makeup artist who has worked on Mulan, The Orville, Ryan Murphy’s Hollywood, Civil Twilight, The Clinic, Don Quixote, Toolbox Murders, The Last Of Us: Part II, Star Wars: Fallen Order, and more alongside her music career. This unlikely background helped foster an outsider musical sensibility that is perfectly balanced by an encyclopedic knowledge of the byways and back roads of punk and death rock, both historic and in LA’s contemporary underground music scene, of which her bands have been an integral component for the past 10 years.

Released yesterday on September 15th which is the feast of Our Lady of Sorrows, a Roman Catholic religious day of observance that honors the Virgin Mary (whose iconography for date often shows her with seven long knives or daggers piercing her bleeding heart), Mater Dolorosa is an exciting next chapter for this intriguing and beguiling artist. It was produced by Paul Roessler and is out now via Kitten Robot Records.