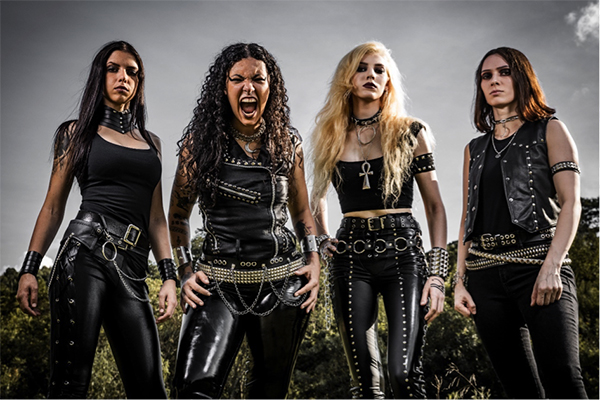 CRYPTA – New single “Dark Night Of The Soul” out now

Brazilian / Dutch death metal powerhouse CRYPTA is ready to re-open the portals of hell by presenting the third single, “Dark Night Of The Soul“, off their upcoming debut album, along with an official full band playthrough video.

The new single delivers a bold message of pure hardness, perilous atmosphere and underlines the heightened level of potency and experience from their successful past and current projects, enhancing influences from both classic and modern death metal genres.

CRYPTA‘s debut album will be out this Friday – descending upon the earth like an apocalyptic meteor! Echoes Of The Soul was recorded in January 2021 at the Family Mob Studio (Brazil), mixed by Arthur Rizk (Code Orange, Powertrip etc.) and mastered by the famed Jens Bogren (Opeth, Dimmu Borgir, Sepultura etc.). The cover artwork was created by Wes Benscoter, who is internationally famous for his stunning covers for bands such as Slayer, Kreator, Black Sabbath and many more.

Watch/Listen to “Dark Night Of The Soul” HERE

Order the thrilling debut album Echoes Of The Soul NOW!

Atmospherically dark and threatening, the 55-second intro “Awakening” prepares the listener for the oncoming ferocity of Echoes Of The Soul, dispensing murky, fiery fuel into the death metal machine. Their significant sonic texture derived from various death metal subgenres and traces of classic thrash becomes instantly evident as the album begins, reflective of the entirely vicious, infernal aura the 10-track debut is about to unleash.

Echoes Of The Soul tracklisting:
1. Awakening
2. Starvation
3. Possessed
4. Death Arcana
5. Shadow Within
6. Under the Black Wings
7. Kali
8. Blood Stained Heritage
9. Dark Night of the Soul
10. From the Ashes