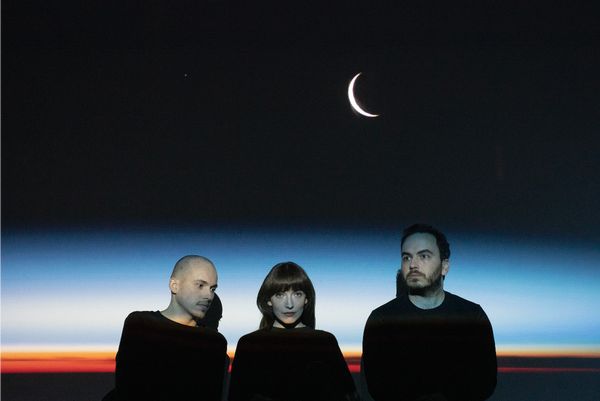 First Single ‘Be On Your Way’ Released Today
LISTEN/WATCH HERE

Returning with its first studio album for seven years, Stereo Mind Game is a new chapter for Daughter. Released on April 7th, the group’s third record follows Not to Disappear (2016) and soundtrack Music from Before the Storm (2017).

After more than a decade spent depicting the darkest emotions, the trio of Elena Tonra, Igor Haefeli and Remi Aguilella present their most optimistic record yet.

The album’s lead single, ‘Be On Your Way’ is released today and accompanied by a video created by Tiff Pritchett. The track is a longing but resilient song about an enduring connection that is also indefinable. The romantic figure Tonra addresses in the song is someone she met in California while writing the record. They shared a significant connection but she knew the Atlantic lay between them.

The video for ‘Be on Your Way‘ evokes a collection of memories, with footage of Tonra superimposed with images of beautiful passing moments – the flight of a bird, a field of flowers. ‘Be On Your Way’ is not a loss of hope but a confidence in and acceptance of the passage of time.

Check out ‘Be On Your Way’ HERE or via the player below.

Connection and disconnection permeate Stereo Mind Game‘s twelve songs literally and figuratively. In the intervening years since the Ivor Novello-nominated Music from Before the Storm (2017), the band has moved away from their initial London base – Aguilella relocated to Portland, Oregon, Haefeli to Bristol, England – and spent time on their own projects (including Tonra’s debut solo album under the moniker Ex:Re in 2018).

However, despite the physical distance – further exacerbated by the pandemic – Daughter continued to meet and write together. Produced by Haefeli and Tonra, Stereo Mind Game was written and recorded in various locations including Devon, Bristol and London, England, San Diego, California, and Vancouver, Washington.

For the first time, Tonra’s is not a lone voice. Haefeli lends vocal lines on ‘Future Lover’ and ‘Swim Back’ and on ‘Neptune’ a choir appears. Voice notes from friends and family feature on ‘Wish I Could Cross The Sea’ and ‘(Missed Calls)’.

Stereo Mind Game is released on 7 April and will be available digitally, on CD, cassette and on standard eco-black, eco-mix colour (indie retail only) and green (Rough Trade exclusive) vinyl formats. For pre-order information head HERE.

Tracklisting
1. Intro
2. Be On Your Way

Formed in 2010 in London by Elena Tonra, Igor Haefeli and Remi Aguilella, Daughter rose to success with their first studio album If You Leave in 2013 which debuted in the Top 20 of the UK charts. Their follow-up, 2016’s Not to Disappear, garnered similar critical and popular acclaim and the trio has headlined sold-out shows around the world. After releasing the videogame soundtrack Music From Before the Storm in 2017, the band spent time on individual projects. Tonra debuted her solo venture, Ex:Re, in 2018 with a self-titled album recorded in 4AD’s basement studio in London.