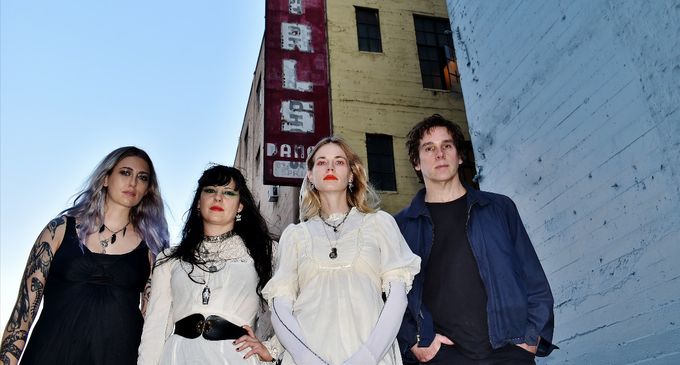 Based on your current station in our technological age, Death Valley Girls‘ fusion of feral proto-punk, ’70s scuzz dirges, and third eye mysticism is either completely at odds with your worldview or utterly revelatory. Words like “retro” or “old school” convey a starry eyed nostalgia that do a disservice to the band’s harnessing of primal instrumentation and communal reverberations—if something in Death Valley Girls‘ sound harkens to the past, it’s only in an attempt to dislodge us from the static of the present.

That dedication to lifting the veil of modern illusions continues with their current single “Dream Cleaver”—a rousing anthem in praise of psychonaut and ethnobotonist Terrence McKenna, his research on “the spirit molecule” DMT, and the possibility of trans-dimensional travel. Lest one thinks that this is some blissed out cosmic ride on new age synth pads, be aware that“Dream Cleaver'” is an unapologetic stone-cold rocker—an unabashed orgy of Farfisa organ hooks, Larry Schemels’ hypnotic and propulsive guitar chords, hallucinatory sax lines, and Bonnie Bloomgarden’s call-to-arms vocals. If you need to get elevated, take a three-minute dose of “Dream Cleaver”. Suicide Squeeze is proud to release the single to the world on digital platforms.

Speaking about their new track, Death Valley Girls said “On our quest to consider the mysteries of the universe, and what happens after life – we became very interested in Terrence McKenna. Particularly his ideas on trans-dimensional travel. Mr. Mckenna proposed that DMT (dimethyltryptamine) sent one to a “parallel dimension” and that literally enabled an individual to encounter “higher dimensional entities.” We believe that these entities hold the secrets of the universe and the afterlife! We became obsessed with trying to contact them, so we don’t have to wait till the afterlife to have some answers to these questions!”

Death Valley Girls feels less like a band and more like a travelling caravan. At their core, vocalist/multi-instrumentalist Bonnie Bloomgarden and guitarist Larry Schemel channel Death Valley Girls’ modern spin on Fun House’s sonic exorcisms, early ZZ Top’s desert-blasted riffage, and Sabbath’s occult menace. Their relentless touring schedule means that the remainder of the group is rounded out by whichever like-minded compatriots can get in the van. On their third album ‘Darkness Rains’, bassist Alana Amram, drummer Laura Harris, and a rotating cast of guests like Shannon Lay, The Kid (Laura Kelsey), and members of The Make Up, The Shivas, and Moaning help elevate the band from their rogue beginnings to a communal ritualistic musical force. On the surface level, Death Valley Girls churn out the hypercharged, in the red, scuzzy rock every generation yearns for, but there is a more subversive force percolating beneath the surface that imbues the band with an exhilarating cosmic energy.