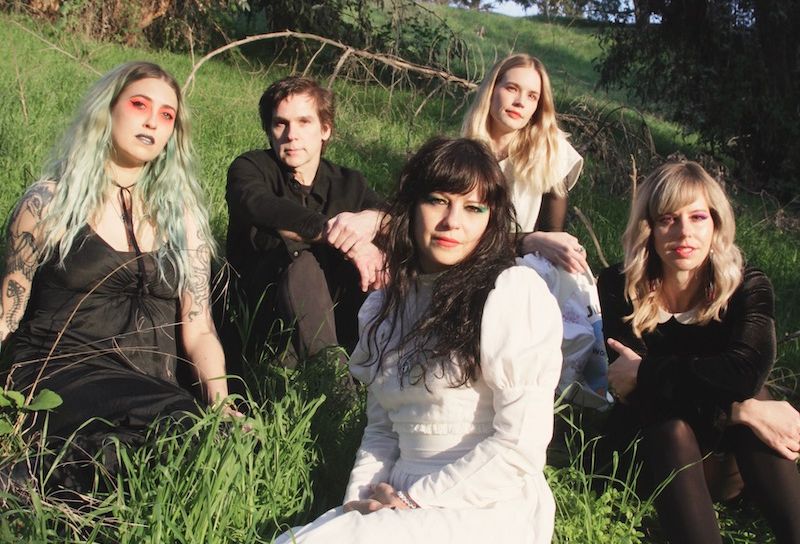 Death Valley Girls are set to reissue their album ‘Glow in the Dark’ on August 27th via Suicide Squeeze Records. Today the Los Angeles dystopian punks are sharing a new video for their single “I’m A Man Too“, from the record.

Speaking about the track, Bonnie Bloomgarden, vocalist & guitarist of Death Valley Girls said “What it means to be a man and what we expect from a woman has negatively impacted all our lives. How we treat each other and ourselves shouldn’t be based on society’s ideals of gender! Everyone is a unique combination of feminine and masculine energy. It’s constantly changing. Somebody outside of you telling you how to be yourself is the most ridiculous and harmful thing I can imagine. You are a beautiful combination of many different things. Get to know yourself, be the most authentic you you can be. Label yourself if you wanna, don’t if you don’t, respect yourself and who everyone else is; that’s who they are!”

You often hear people talking about how a certain artist saved their life. You also frequently hear people talk about how certain shows can be borderline spiritual experiences. Sure, it might be hyperbole, but any music head knows those experiences are very real. And for Death Valley Girls, the mortal stakes and transcendental power of music was at the core of their mission. The band quite literally began as a haven for vocalist/guitarist/keyboardist Bonnie Bloomgarden and guitarist Larry Schemel as they navigated getting clean from hard drugs. It was a kind of rebirth, an outlet for a new way of living. And with that newfound appreciation for life came a thirst for communal celebration. Their shows took on a mystical fervor. They were a pure manifestation of all the great moments of rock n’ roll—the adrenalized swagger of the electric pioneers, the razor edge of those early metal masters, the rough-hewn heft of first-generation punk—with any hint of nihilism swapped out for an affirmation of life.

Death Valley Girls’ sophomore album Glow in the Dark (2016) is a white-hot distillation of their sound and spirit—a jittery and jubilant joyride of barnburner guitar riffage, goosebump-inducing choral hooks, pounding rhythms provided by drummer Laura “The Kid” Kelsey and bassist Alana Amram, and an overarching aura of some secret and subversive power. The band wastes no time detailing their strategies as they crash out of the gate with the title track. Bloomgarden and auxiliary vocalist Jessie Jones issue the song’s call to arms—”unite, multiply, and conquer”—as a rallying cry to likeminded souls. “Once you realize that money, government, and this whole system is a shitty construct that doesn’t work and stands in the way of our true magical infinite potential, we start to glow,” says Bloomgarden about Glow in the Dark. “And we can see everyone that believes ’cause they glow too!” It’s hard to not feel that magical tingle during the riotous stomp of “Disco,” the old school rattle-and-raze of “Death Valley Boogie,” or the fire-and-brimstone proselytizing of “Seis Seis Seis.” While the initial line-up of Death Valley Girls—featuring the core duo of Bloomgarden and Schemel with bassist Rachel Orosco and drummer Patty Schemel—ruminated on the hellish realities of the modern world on their debut album Street Venom, the Glow in the Dark-era Death Valley Girls reveled in the secret bond between the misfits and outcasts who refused to bow to crushing weight of “capitalism, classism, and elitism.”

Up until now, Glow in the Dark has been as elusive and mysterious as the forces behind its title, with physical manifestations of the album being out of print since 2016. Suicide Squeeze Records is proud to join the luminescent army with an official reissue of Glow in the Dark on August 27th, 2021. The album will be available on digital platforms and as an initial vinyl pressing limited to 2000 copies (1,500 on Unite, Multiply, & Conquer splatter vinyl, 500 on Little Ghost tri-color vinyl).

Glow in the Dark artwork: