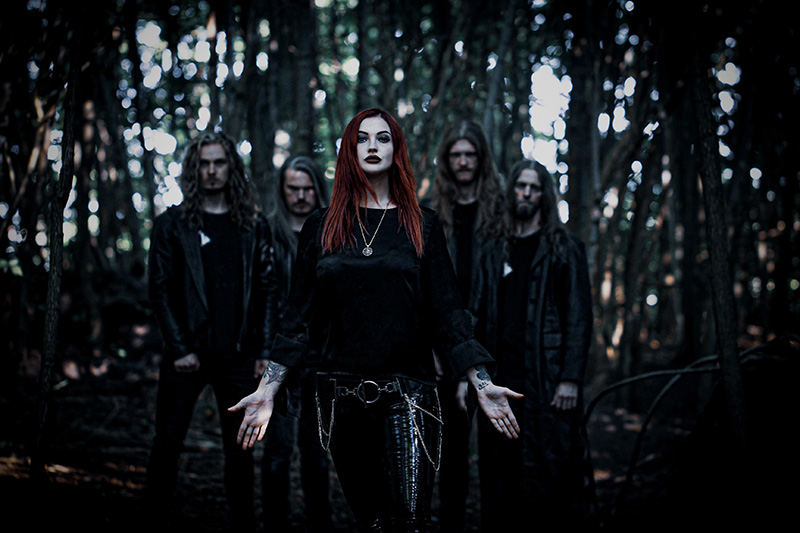 Debut Album, “The Resurrection Of Lilith”, out September 2 | Pre-Order NOW!

The record marks a multifaceted, grim and bludgeoning escape that spans the arc between raw death metal and symphonic grandiosity with ease, showcasing DEFACING GOD‘s ambition to bewitch metal fans around the world with their sonic universe.

With their conceptual themes, the Denmark based outfit focuses on the seeping darkness that moves in us all – rooted in occultism and witchcraft, but primarily the mythologically mysterious female demon Lilith and her tales of fervent defiance and perseverance.

The second single from The Resurrection of Lilith, entitled “The End Of Times”, is out now – and a direct hit to the skull! Starting with a wall of blast beats and fast palm muted guitar rhythms, this banger takes you right into insanity, sorrow and pain. “The End Of Times” is a perfect example of extreme melodies paired with haunting orchestral elements, echoing the styles of artists such as Cradle of Filth and Dimmu Borgir.

DEFACING GOD on “The End Of Times“:
“The term ‘End Of times’ relates to the era that precedes the termination of life on earth, with different man-made religions interpreting the events and time of its occurrence. The end of times marks the moment of divine retribution where the world will receive its grand judgement, widely referred as the Apocalypse. In our attempt on creating the sound and the visuals of the Apocalypse, the world is seen through the eyes of Lilith. The lyrics say, ‘This is the end of times; the cosmic energy has brought. Omniscience balance, the ascension has begun’.

We can ́t control the power of nature and cosmic events as we are simple mortal beings. Not only are we threatened by the force of nature beyond our control, but we are also threatened by our own flesh and blood. The urge of materialism, authority, power, status, and money, which can all lead to wars, oppression, pain, and sorrow.

The song refers to the spiritual aspects and realities that are supposed to be hidden behind humanity’s material world and the evil of the spiritual world, but in fact it alludes to the man-made horrors of war, greed, oppression, mass consumption, the lack of integrity, and our self-made road to destruction which will eventually lead to the end of humanity.

If we were to be asked, ‘What would the Apocalypse sound like?’, then this is it. As the lyrics also state, ‘Passengers on the death train, welcome everybody – time to climb onboard!'”

Join the cult and watch the video for “The End Of Times” HERE:

Through their storytelling, music and aesthetic, the band pulls their listeners into a dark universe of obscure myths, folklore and ancient stories, all the while weaving in often subtle lyrical inspirations from modern societal oppressions and personal demons.

Sonically, DEFACING GOD balance massive extreme melodies with a twist of grandiose orchestration by Lars Vinther, echoing the styles of artists such as Cradle of Filth, Carach Angren and Dimmu Borgir. But rather than blend it with a conventional dose of black metal, the band proudly merges these auras with infernal death metal.

Additionally, The Resurrection Of Lilith was produced by Jacob Hansen – known for his work with Fleshgod Apocalypse, Volbeat, Evergrey, Epica and countless others.

DEFACING GOD state:
“A lot of mixed emotions and passion has been held over and inside this album and to support those emotions our sound is both eerie and dramatic, filled with symphonic details to set the mood and atmosphere. We have created a lot of details so that the listener is challenged, which is why it is important to mention that we chose to work with Lars Vinther on the tracks.

Lars did the orchestration parts and he is that ´´extra´´ we needed to complete our sound with the classical components and to make our sound more grandiose and dramatic. The use of classical instruments/symphonics is something that is more seen in the modern black metal genre (Cradle, Dimmu Borgir etc.)

But we play melodic death metal and because of our love for classical music and our dark and massive sound, we thought it would be interesting to experiment with the orchestrations and more layers in our music.
Melodic death metal has been made a million times before, but I think we managed to make this piece very personal with all the experimenting.

The rising force of occult Melodic Death Metal with their impressively grand debut!

The Resurrection Of Lilith arises with a cinematic, chanting introduction, leading the listener into the demonic world of DEFACING GOD.

Building up tension to release into an uncompromising melodic, orchestral death metal assault on “The Invocation Part I “Lilith””, the track emerges as the first of three songs introducing female forces of legend as a trinity to be reckoned with – the first being Lilith, Adam’s first wife, who refused to obey and now reigns as a symbol of feminine rage and independency, but also for the darkness found within oneself.

Bookending the undeniably strong “The Resurrection” are parts two and three – “The Invocation Part II “Jezebel”” and “The Invocation Part III “Abyzou”” – which lead into “The Rise of Trinity”. The remainder of The Resurrection Of Lilith proves to be an auditory onslaught of epic proportions, seeing DEFACING GOD unleash their supreme power and full songwriting dynamics with varying yet unrelentingly hard-hitting tracks like “The End Of Times”, “Echoes From Fulda”, “Death Followed Like a Plague” and “Enslaved”.

Penultimate track “In the Land of Rain and Sorrow” blasts with a blackened, dense wall of sound before the album closes with encapsulating, symphonic “Into the Mist of Memories” – featuring a neo-classically inspired guitar solo.

The Resurrection Of Lilith will be available in the following formats:
Digisleeve
1LP Gatefold RED Vinyl
Digital Album