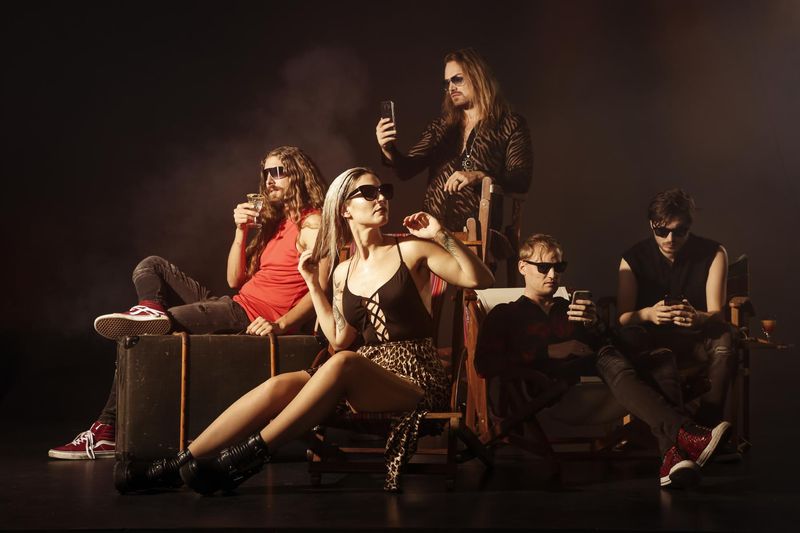 While fans eagerly await DELAIN‘s sixth full studio album, Apocalypse & Chill, scheduled for release on February 7, 2020, the band has generously offered a fourth single, “Ghost House Heart”. The track showcases the delightful diversity of DELAIN‘s upcoming album – an offering that truly takes you on an amazing journey. In contrast to the bombast of “Masters of Destiny”, the epic highs of “Burning Bridges” and the cool modern vibes of “One Second”, DELAIN takes it back to raw essence with the hauntingly beautiful “Ghost House Heart”, the first ballad to be released by DELAIN since “See Me In Shadows” from their debut album released in 2007.

Charlotte on “Ghost House Heart”:
“Going back to such an intimate song after the bombast of “Masters of Destiny” and “Burning Bridges” feels a bit like switching gears, but I enjoy every minute of it. Singing this song is almost meditative, and I love the way voice, piano and violin weave together in the track. I hope our fans will love this change of pace as well, and I can’t wait to perform this song live on stage during our upcoming UK tour, and our Valentine’s Day release show in Utrecht.”

Martijn on the creation of the new song:
“This song was created while spontaneously playing and singing together with Charlotte. It seemed to create itself. It’s also a nice change of pace in relation to the other songs we have written for the new album. As a pianist, of course it is fun to play a piano song for a change. We worked with violinist Shir-Ran Yinon and I think the way the violin intertwines with the vocal lines is mesmerizing. The video was a lot fun to make and it was a beautiful set with a lot of history.”

DELAIN‘s newest full-length offering, Apocalypse & Chill, will hit the stores on February 7, 2020 via Napalm Records. The upcoming release explores topics of impending doom and human indifference, making this their boldest, most daring and undeniable offering yet. Brutal riffs, synth-heavy soundscapes and fully orchestrated compositions with vocalist Charlotte Wessels’ extraordinary vocal potency will enthrall the listener, while the new influences might surprise. Martijn Westerholt valorized the music and direction of the album not just as keyboard player but as producer. The broad soundscapes on Apocalypse & Chill range from anthemic rock to electronic metal and breaks all stereotypes, without losing the special DELAIN trademarked sound! Dance through the burning cities of ash with DELAIN!

Apocalypse & Chill will be available in the following formats:

DELAIN surged into the music scene in 2006 with the release of their first album, Lucidity. Now, in 2019, the band around Martijn Westerholt and Charlotte Wessels has five successful releases – including the hit album Moonbathers which ranked in the Top 20 in the Netherlands, Germany and Switzerland, as well as Top 50 in the UK and Belgium – under their belts and continues to enchant fans the world over. Having toured the world as headliners, as well as supporting artists for notable bands like Sabaton, Nightwish and Within Temptation, and having rocked festivals like Wacken Open Air and Download Festival, DELAIN have strongly carved their niche within the scene. Their single “Stardust” off of their chart-breaking album The Human Contradiction – with over 10 million views on YouTube and millions of streams on streaming platforms from all over the world – proves that theory, as well!