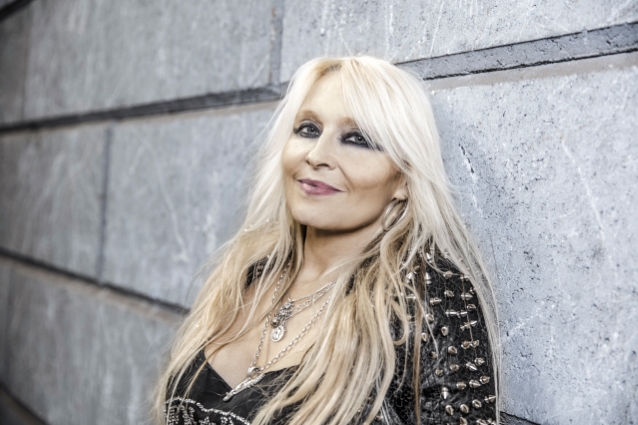 On November 13th, 2020 Metal Queen DORO proves once again that she literally gives her all when she cares about something. On this November 13, DORO‘s own label, Rare Diamonds Productions, will release her long awaited best of album “Magic Diamonds – Best Of Rock, Ballads & Rare Treasures“.

And that’s what it’s all about: 56 (!) songs on three CDs with a total of almost four(!) hours playing time! An all-around impressive showcase that spans four decades of DORO music and with 20 rock songs, 18 ballads and 18 rare treasures offers everything a fan’s heart desires – and a lot more!

Because: The three CDs will be released in a high-quality box containing a valuable, exclusive DORO perfume called “True At Heart” as well as a “Magic Diamonds” tube scarf!

Doro: “I have been dreaming of my own perfume for many years. Now the time has finally come“.

The fragrance – and therefore also the 3 CD box – is available in two versions: “For Him” and “For Her”.

DORO reveals: “The big vinyl box contains two double LPs and as an encore the “Rare Treasures” bonus CD and a poster.
Whichever version of these magical best of boxes you secure, you open a full treasure chest full of mega-hits, powerful off-beat songs, and enchanting ballads with melodies to kneel down; as an encore you will find rare pearls in the form of previously unreleased treasures such as the NYC version of “Prisoner Of Love” or a brand-new re-recording of DORO’s favorite song “Love Me In Black“.

DORO explains: “Since we all miss the concerts so much at the moment, I decided to release great live moments of songs like “Even Angels Cry”, “Rare Diamonds”, “Revenge”, “Raise Your Fist In The Air” as well as a wonderful version of “Make Time For Love” here as well“.

What would a best of album by DORO be without reminiscences of the great friendships DORO has with her colleagues and heroes of heavy metal? And so here DORO delivers fantastic interpretations of Dio’s “Egypt (The Chains Are On)”, Metallica’s “Nothing Else Matters” and Judas Priest’s “Breaking The Law”. The latter in an orchestral version in duet with Udo Dirkschneider.

In addition, the metal queen presents enchanting duets with her favorite friend Lemmy (“Love Me Forever”), Pete Steele (“Descent”) and Tarja Turunen (“Walking With The Angels”) and serves her great anthems like “Fight” and “She’s Like Thunder”, which she wrote for her friend, boxing world champion Regina Halmich. Not to forget “Warrior Soul”, the movie soundtrack of the movie “Anuk – The Way of the Warrior”, in which DORO played the female lead role, and of which part 2 and part 3 will be released soon.

All in all, an unbeatable package that brings a bright light to dismal November days – true to DORO’s motto in life: “I make music to give people joy, hope and positive energy”. And: “My songs are often based on personal experiences that are also of a spiritual nature – like “1000 Mal Gelebt”, “Undying” or “Fortune Teller”!

You don’t have to be a fortune teller to predict that “Magic Diamonds – Best Of Rock, Ballads & Rare Treasures” will be celebrated by the fans.
And rightly so!