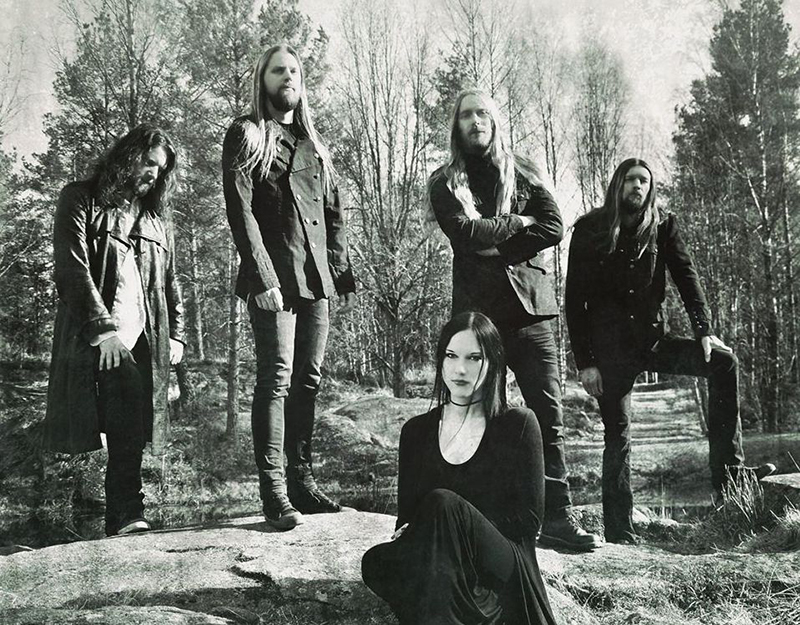 A haunting doom spirit covers the world underneath
a melancholic Godless Veil!

Almost five years after the release of their long-player Sovran, DRACONIAN unveiled their highly acclaimed epos and seventh full-length, Under A Godless Veil, in October 2020 via Napalm Records. Entering the charts in several countries, this prodigious album marks the unit’s most successful record to date and delivers a captivating mélange of dreary doom and contrasting vocals, and mixes Heike Langhans’ angelic voice with Anders Jakobsson’s death growls. Now, this intoxicating piece of art will be released as an atmosphericly conceptualized picture vinyl, out April 23rd 2021.

DRACONIAN on Under A Godless Veil:

“To DRACONIAN, Under a Godless Veil is by far the most diverse album we have created. Inspired by some of the music closest to Johan’s heart; everything from traditional Doom to scaled-down, Gothic rock-inspired pieces and more. Some will perhaps describe the songs as more refined and meditative. Some ambient elements have been added to the mix without overshadowing the traditional characteristics that are DRACONIAN.

Resonating with the compositions, Anders’s lyrical direction is ambiguous and a progression of the first two-three albums, yet more subtle while embracing the Gnostic philosophy more directly. One could say Under a Godless Veil is an act of contemplation; About living and dying and remembering who we are in a strange, abrasive world far from home.”

Pre-Order Under A Godless Veil on picture vinyl HERE:

The one-hour long album, graced  with a haunting cover artwork by Natalia Drepina, carries the legacy of gothic doom metal à la My Dying Bride or Trees Of Eternity into the new decade and will drag the listener into a sorrowful cosmos with the very first notes of spellbinding opener “Sorrow Of Sophia”, interweaving beauty with crippling depression.

After crushing slow rhythms and the fragile “Sleepwalkers” that leads through barren soundscapes, the band – founded in Säffle / Sweden in 1994 – rises up to their best in the nine-minute long “Ascend Into Darkness”, which will echo in the listener’s ears long after the final chord has died away.

“Under a Godless Veil is a milestone in the metal scene and in a career that has grown
with vision and resilience.”
Metal Hammer PT (4/5)

“Under A Godless Veil is another massive album from a band who, 26 years into their career, show no signs of stopping.”
Powerplay UK (8/10)