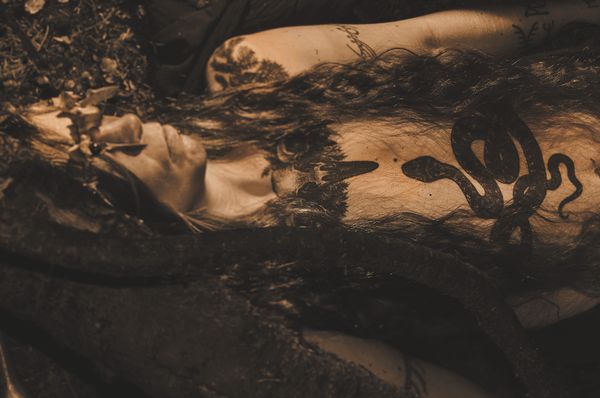 ­”Minningar úr undirheimum” (‘Memories from the Underworld‘) is a harrowing musical journey carrying the listener through the fringes of dark ambient and ritualistic drone.

The sixth album of Swedish-Icelandic artist and musician Draugurinn offers bewitchment and beauty in equal parts. Its three epic tracks undergo gradual build-ups working towards a ceremonial climax; intricate and layered, sophisticated minimalism saturated with both compositional and conceptual depth.

Draugurinn commented: “As with all of my previous works, nature has served not only as an underlying muse but also as part of the actual instrumentation. The bullroarer – a ritual music tool dating back to at least 18,000 BC – played an integral role on “Minningar úr undirheimum”, as did various percussion such as drums, bones, rocks, rattles, bells, horns, and my staff. Furthermore, I used both my voice and my guitar to conjure up the solidifying ambience which weaves together all three parts into one”.

­”Minningar úr undirheimum” will be available as of May 27, 2022. As is the norm with a Draugurinn release, this is more than just an album – it is a holistic package meant to be experienced in unison.

The full-colour A5 digipak booklet features an ambitious art collection courtesy of Draugurinn herself: stunning paintings influenced and informed by findings from Neolithic and Mesolithic burial sites across Scandinavia.

When Draugurinn composed “Minningar úr undirheimum”, the original intention was to enact it as a live ritual on the vernal equinox of 2020 – at a combined art and music event commemorating the release of “Budet” by fellow Nordvis act Grift. However, due to restrictions in the wake of COVID-19, the gathering was cancelled.

What is notable here is how all of Draugurinn’s public performances – of which there have been six since she started out in 2008 – are one of a kind. The music and accompanying aesthetics are specifically tailored for each event and then never reused. So, while the equinox celebration never materialised, the ritual lives on through “Minningar úr undirheimum”.