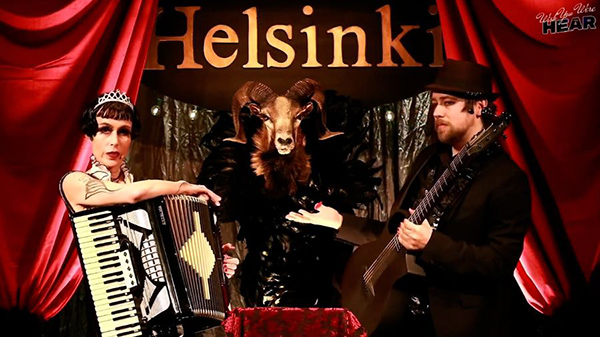 The virtual vaudeville show Wish You Were Hear, produced by experiential design artist Corey Aldrich at acclaimed live music venue Club Helsinki in Hudson NY, features the wistful verses and morbid amusements of house band Dust Bowl Faeries, paired with a curated program of monthly musical special guests. Each thematic show is ticketed and will stream from a private youtube link. The shows begin at 8:00pm and tickets are available on a donation basis to support the musicians in these difficult times of ongoing closure.

Dust Bowl Faeries duet (Ryder Cooley & Jon B. Woodin) will intrigue and enchant you with dark cabaret music, played on accordion, singing saw, ukulele and acoustic guitar. Hailing from the New York Hudson Valley, the band was founded by artist Ryder Cooley and Hazel, a disembodied taxidermy ram who performs with the Faeries as their mascot-spirit animal. The faeries’ eclectic repertoire of songs draws inspiration from circus, post-punk and Eastern European folk music. The ensemble recently released a new album, The Plague Garden, along with a new video, “Candy Store,” produced and directed by Lisa M. Thomas of Thin Edge Films.

“The band creates sounds both mystical and ethereal, and have drawn comparisons to Gogol Bordello, David Lynch, Dresden Dolls and Dead Can Dance.” —Stitched Sound 2020