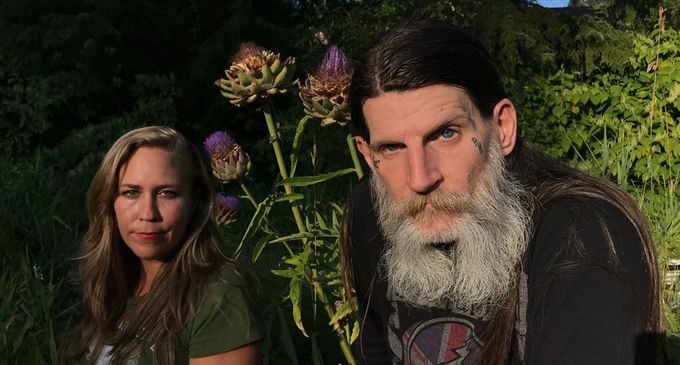 The immeasurable duo Earth have announced a full European tour this November (dates below) in support of the new album, Full Upon Her Burning Lipswhichis out now via Sargent House.

Listen to the full stream here.

Commemorating a three-decade reign as one of metal’s most monolithic bands, Full Upon Her Burning Lips spares no expense in time or talent. While the duo’s musical vocabulary has expanded as the years have passed, every note still carries the weight of the world. Back with a sound more organic than ever, the tried-and-true magic between guitarist Dylan Carlson and percussionist Adrienne Davies unfurls with each of the record’s ten tracks.  The purest distillation of Earth yet, and indeed, anyone that’s followed Earth on their journey will bask in the unadulterated hums, throbs, and reverberations conjured by Carlson and Davies.

“The minimalist drone-riff masters pare away excess and focus on the seismic repetition that made their best work so resonant, creating a new peak in their long discography.” –PITCHFORK

“Part of the appeal with Earth is that you never know when they’re going to launch into free-jazz freakouts or Ennio Morricone soundscapes. But there’s still something satisfying about them doing basic stick-to-your-ribs doom metal with this kind of majestic mastery.” – STEREOGUM

“This is Earth simply being Earth; they still sound like no one else.”  – PROG“Dylan Carlson is now rightly recognised as something of a visionary, shining a light on the darkest corners. As is said of jazz, Earth’s art lies in that which they omit, and on their ninth album Carlson and percussionist Adrienne Davies deliver 10 songs that are the apotheosis of their spartan sound.” – MOJO“This album is richer, warmer, more vibrant.” – LOUDER THAN WAR

“‘Full Upon Her Burning Lips’ is sumptuous, a return to basics informed by Earth’s decade-and-a-half period of discovery. The album’s impeccable balance of those poles places it among the band’s finest recorded offerings.” – ALL MUSIC