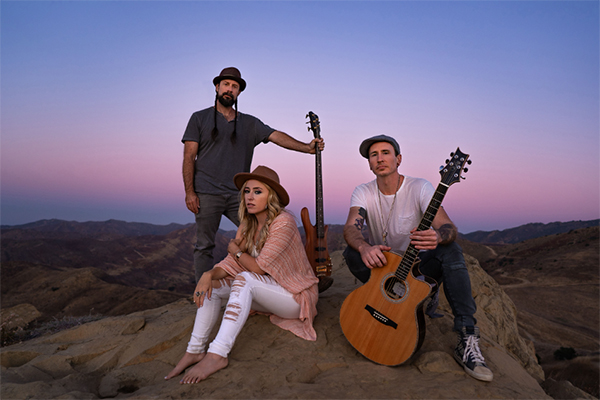 While the pandemic has changed this season’s sendoff for parents witnessing their kids leave the nest for the first time – whether it’s for kindergarten or college, the inextricable intertwining of pride and fear is in full swing. Los Angeles-based power trio EAST OF JUNE immerse themselves in this annual rite of passage in their new song and video “Little Bird.” Written from a parent’s perspective as their child moves out for the first time, the song carries both the nervousness, hope and trust that all will work out for the best as their child experiences life away from the safety of their wings.

“As a parent there is no greater fear than watching your child let go of your hand and tackle life’s uncertainties and challenges on their own,” says bassist and parent Dirk Lance (formerly of INCUBUS).  “There is also no greater joy and sense of accomplishment to be had in this world than watching them discover what they are truly capable of without you.”

Vocalist Emily Rath adds, “Creatively, I felt a strong connection to my own life writing these lyrics because as an only child I was somewhat of a late bloomer in many ways and felt a little more anxiety about leaving my comfort zone than others my age. However, I knew that when I did, I would always have the support and love of my family to carry me regardless of how far away I went. I wanted to show that idea in the song by exploring how hard it can be for not only the child, but the parent too who knows that you can’t truly discover who you were meant to be without taking risks, learning your own lessons and flying away from the nest even when you’re scared.”

Filmed in Long Canyon Trail in Simi Valley, CA by Director of Photography Robert Schweiger, the video shows the band performing the track against a serene desert backdrop. “Initially, we liked how using a drone gives the viewer the feeling of a bird in flight, watching our performance from the skies above,” adds guitarist Kyle Mortensen. “Further into our brainstorm, though, we discovered the deeper story of tracing our own parallel paths with music over the years and introduced the idea of weaving together images of our childhood. It all comes together when we see Dirk with his own daughter and him passing the musical torch on to her as the cycle continues to go on.”

In addition, East of June is partnering with Alternative Press for a livestreamed performance set for Friday, September 25th at 7:30pm PT / 10:30pm ET.  Broadcast via Facebook Live, the online event will feature the band performing a handful of songs with a Q&A to follow.

Formed in 2018, EAST OF JUNE features bassist Dirk Lance, vocalist Emily Rath and Kyle Mortensen on guitar. Dirk, a founding member of Incubus who co-wrote and performed on the famed rock band’s hit albums, S.C.I.E.N.C.E., Make Yourself, and Morning View, was a force behind the group’s biggest songs “Drive,” “Pardon Me,” and “Wish You Were Here.” After leaving Incubus, he spent the last decade on a passion project called Willie’s Nerve Clinic before joining with Kyle to start a songwriting collective. After meeting and working with Emily, the trio decided they had something awesome to share, and it was time to put a name to the collaboration, EAST OF JUNE.

“Little Bird” is now available on all digital platforms.